Former President Donald Trump wields a powerful spell over Illinois Republicans with a majority declaring him as their top choice for the White House in 2024 and even more believing legally he should still be there.

More than two-thirds of the state’s GOP voters believe Trump actually won the 2020 election. And nearly nine out of 10 still like the combative former president.

Those are some of the conclusions of a new Chicago Sun-Times/WBEZ poll that takes the political pulse of a state GOP eagerly trying to regain its political footing in Springfield but facing a split between its rising Trump-allegiant wing and its longtime establishment wing seeking to avoid being clipped.

Trump lost Illinois by 17 percentage points in 2020. But Republicans here aren’t bailing on him, despite that reelection drubbing, his double impeachment or bi-partisan congressional hearings aimed at highlighting his bellicose role in the fatal Jan. 6, 2021 insurrection.

Those undeniable and historic stains on Trump’s record seem virtually unnoticed by some of the Republicans polled by the Sun-Times and WBEZ.

In fact, it’s almost like none of it happened — or matters. Large numbers of Illinois Republicans still put Trump on a pedestal alongside arguably the party’s most revered president of the 20th Century, Ronald Reagan, a product of downstate Tampico.

“One of the big stories from this poll is it really shows Trump’s continued hold on Republican primary voters,” said Jim Williams, a polling analyst with Public Policy Polling, the North Carolina-based pollster that conducted the Sun-Times/WBEZ survey on June 6 and 7.

Nationally, Trump’s grip on the Republican Party has come under question, particularly after he whiffed in his high-profile primary endorsements in Georgia, Nebraska, Idaho and North Carolina, where he failed to secure reelection for controversial Rep. Madison Cawthorn.

But the Land of Lincoln is solid Trump turf for Illinois Republicans, the Sun-Times/WBEZ Poll suggests.

“I know there’s been some speculation over the past several months as these primaries have played out whether or not Donald Trump and those Republican primary voters are still in lockstep with each other,” Williams said. “I think at least on the results of this poll, we’re seeing a lot of indications that they are.”

‘Not a fair election, and nobody wanted to look into it’

The survey of 677 likely Republican primary voters also found an overwhelming majority fall into the election-denier category with 67% saying they do not believe the results of the 2020 presidential election were legitimate. Only 18% thought President Joe Biden actually won, while 15% were unsure.

That’s after more than 60 lawsuits were filed by Trump loyalists in state and federal courts around the country alleging fraud in the 2020 presidential election — and all failed to yield any evidence to prove it. In February 2021, a series of election-challenge cases were rejected by the U.S. Supreme Court — a court on which Trump placed three justices.

Yet, what does the poll suggest Illinois Republicans believe? The 2020 election was bogus — case closed.

“I mean, there’s multiple, multiple cases of evidence that this was not a fair election, and nobody wanted to look into it. None of the judges wanted to take the case or anything, and it’s just really sad,” said Diana Kint, a 60-year-old homemaker from south suburban Crete who participated in the poll.

“I think that the reason [Biden] is so unpopular is because nobody wanted him in the first place — well not nobody, but you know what I’m saying, not enough.”

Even though Trump’s loss is indisputable, his appeal is off the charts among Republicans statewide — 86% view him favorably, according to the poll. And a majority said they’d be more likely to vote for candidates for other offices who had supported him in the past.

Additionally, those answering the poll said the largest group victimized by racism and bigotry is white people, echoing the theme of “white grievance” that Trump has championed as a candidate and as president.

‘One of the better presidents that we’ve had’

Nearly two-thirds of those surveyed believed Trump should run again for president in 2024, with 28% suggesting it was time for the party to move on to another candidate.

But other Republicans considered potential presidential candidates would likely have a tough time beating the former president in an Illinois primary.

Just over half of the state’s GOP voters chose Trump as their choice in a theoretical 2024 Republican primary. 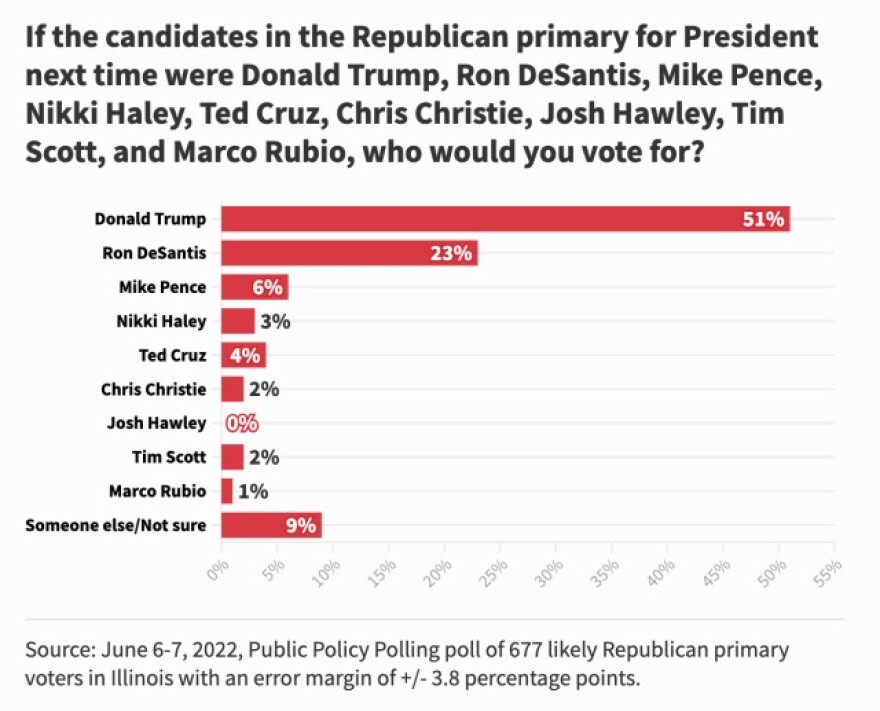 “Considering the way everything is turning out now, how Joe Biden was going to be the savior and unifier and that’s not happening, I think [Trump] definitely will run, and he’ll have my support,” said Joe Turkos, a 52-year-old South Loop resident who participated in the Sun-Times/WBEZ poll.

“He’s probably in my opinion one of the better presidents that we’ve had at least in my lifetime,” said Turkos, who manages a gym and came around and voted for Trump in 2020 after initially supporting Texas Sen. Ted Cruz. “Aside from Ronald Reagan, I think he was the most effective Republican president because he governed more as a conservative, his America First platform. It’s great. I liked how he was tough on China. He was tough on Russia. He was tough on Iran.”

The poll found Trump’s next closest rival among the state’s GOP voters is Florida Gov. Ron DeSantis, whom 23% identified as their top choice for president. Trump’s past running mate, former Vice President Mike Pence, drew support from only 6% of Illinois Republicans.

That’s in contrast to a presidential election straw poll conducted last weekend at the Western Conservative Summit in Colorado that showed DeSantis topping Trump, 71% to 67.7%. The next closest was Cruz with 28%. DeSantis also topped Trump in the same poll last year, in a convention dubbed “the largest gathering of conservatives in the Western United States.”

Eighty-six percent said they either had a very or somewhat favorable opinion of Trump with only 12% indicating any kind of unfavorable view. And the majority of those voters really liked Trump — 58% viewed him very favorably.

“Biden has just totally destroyed our economy, our border, pretty much everything else he’s touched,” said Joseph Sikora, a 60-year-old semi-retired home builder from downstate Collinsville, who participated in the poll.

That’s enough for Sikora to once again root for a Trump comeback.

A deeper look at Trump’s popularity among Illinois Republicans shows he continues to have what can only be seen as massive support in all corners of the state with his strongest showing in the collar counties, where 88% view him favorably. Among downstate and suburban Cook Republicans, his favorability stands at 86% and in Chicago at 74%.

Whether that popularity rubs off on other candidates has been a hit-or-miss proposition. Trump has mostly stayed out of Illinois politics since leaving the White House, though he has endorsed downstate Rep. Mary Miller in her primary against fellow Republican Rep. Rodney Davis.

In the Republican gubernatorial primary, state Sen. Darren Bailey has made no secret of his efforts to curry favor with the ex-president, visiting Trump’s Mar-a-Lago resort in Florida for a Miller fundraiser in late April. No endorsement has materialized, but that hasn’t seemed to harm Bailey, who is up 15 percentage points over Aurora Mayor Richard Irvin in the Sun-Times/WBEZ poll. 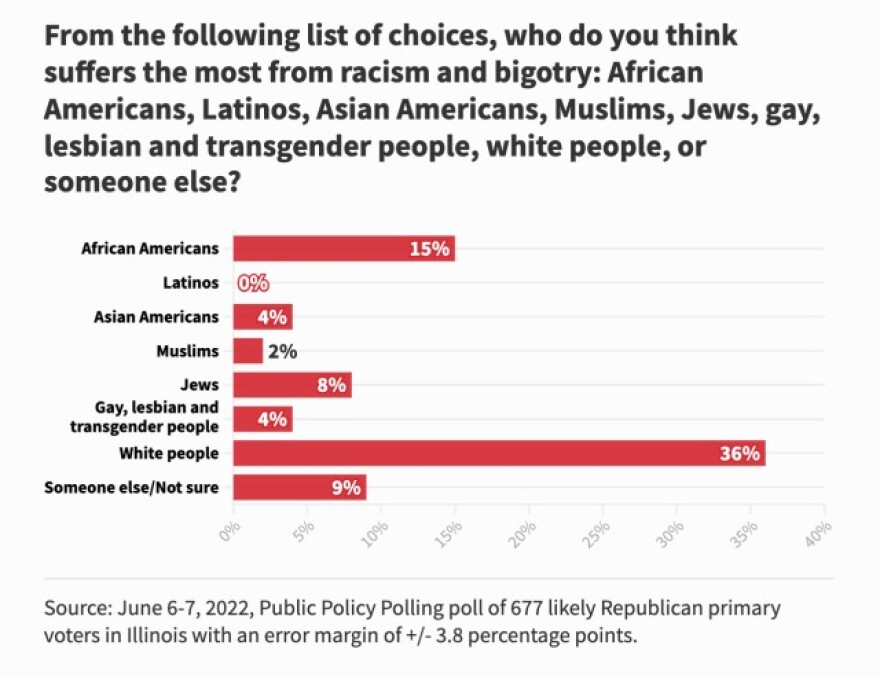 The same poll also found that Illinois Republicans embraced some of the same white grievance ideology that Trump championed while in the White House.

Illinois GOP voters were asked to identify who suffers the most from racism and bigotry from a list of different segments of the population. Thirty-six percent of respondents chose white people. The next closest groups were African Americans with 15%, Jews at 8%, Asian Americans and gay, lesbian and transgender people at 4% and Muslims at 2%.

Kint, the Crete homemaker who participated in the poll, attributed those results to the teaching of critical race theory, a concept built around the idea that racism isn’t simply the result of personal prejudices but instead something long woven into the law. Several Republican-led states have taken steps to ban critical race theory teaching in public classrooms.

“This critical race theory stuff is teaching people that white people are just automatically the bad guys,” she said. “I have three children. One of them one time came home from public school, saying, ‘White males are the bane of society or something like that.’ They teach that stuff in school. She didn’t learn that from me.”

Dave McKinney and Tina Sfondeles cover Illinois politics and government for WBEZ and the Chicago Sun-Times. Follow them on Twitter @davemckinney and @TinaSfon

University of Illinois trustees raise tuition, except at UIS

The University of Illinois Board of Trustees has approved tuition increases at the Urbana-Champaign and Chicago campuses, starting this fall. But trustees chose to keep