Across the country, states desperate to prevent opioid addiction are considering medical cannabis as a solution.

Lawmakers in several states are looking to initiate or expand their medical marijuana programs including Kentucky, New York, New Jersey and Indiana. And in Illinois, where opioids have claimed nearly 11,000 lives over the past decade, the legislature is considering a measure that would allow patients with an opioid prescription get access to marijuana instead.

Such a policy could have made a difference for Springfield resident Larry Lenkart. In 2001, Lenkart awoke one night in severe pain. He thought it was a really bad flu, but it turned out to be diverticulitis – an infection that required four major stomach surgeries followed by years of crippling pain.

“In the beginning, it was like life wasn’t worth living,” Lenkart said. “When you’re in your forties, it’s way too young to be thinking about death everyday.

Lenkart, now 60, was placed on high doses of two different opioids, which he took around the clock. The drugs helped him manage his pain well enough to hold down a job and raise his daughter. He said he never abused them, but he hated the constant worry about when he would get his next dose. 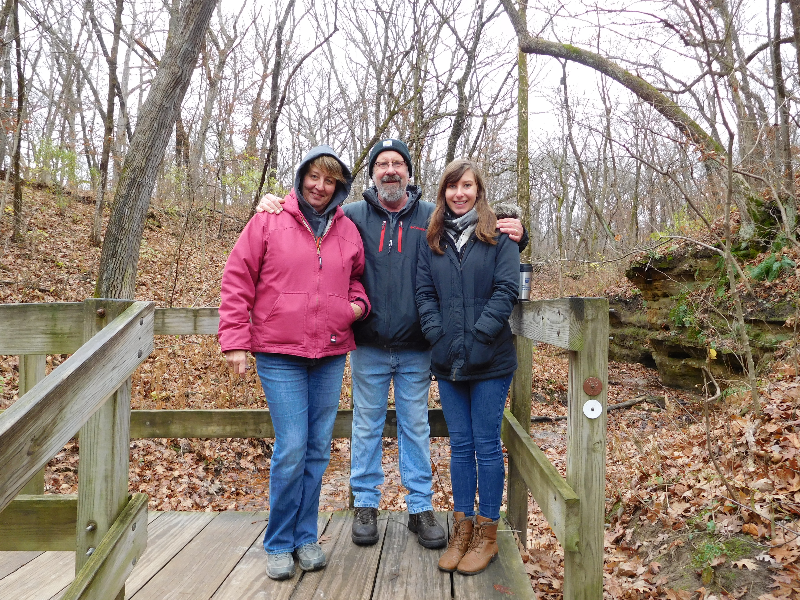 Then last summer, with his doctor’s guidance, he weaned himself off Vicodin and began tapering off Oxycontin as well. To make the process easier, he smoked marijuana every night.

“It would help me forget about [the pain] to the point where I wouldn’t take that last dose of pain meds,” Lenkart said. “I was all for it.”

Though Illinois has a medical marijuana program (along with 28 other states and the District of Columbia), Lenkart got the drug from a dealer. In Illinois, chronic pain does not qualify a patient for the program.  And Lenkart couldn’t find a doctor to qualify him for his fibromyalgia, even though that is one of the 40 conditions Illinois allows.

Now two separate efforts in Illinois might make it easier for patients with chronic pain to get access to medical cannabis.In January, a Cook County judge ordered Illinois officials to expand the state’s medical cannabis program to include intractable pain — that’s pain that can’t be effectively treated with other therapies. But the move is on hold, as the state’s public health department filed a notice to appeal on February 8. A spokesperson said the department is unable to comment on pending litigation.

Meanwhile, Illinois state senator Don Harmon is pushing for a similar change. Last fall, he introduced a bill that would allow anyone with an opioid prescription apply for a one-year marijuana card, receiving approval in 14 days, instead of the usual two to three months. He hopes to move the bill through the legislature early in the spring session, which began on January 30. On February 7, the bill passed the Illinois Senate Executive Committee with a 16-1 vote and heads now to the full Senate for consideration.

“The ravages of opioids and the subsequent use of heroin is killing scores and scores of people in our community,” Harmon said. “[Medical cannabis] seems like a very low-cost, low-risk alternative.”

“The ravages of opioids and the subsequent use of heroin is killing scores and scores of people in our community. [Medical cannabis] seems like a very low-cost, low-risk alternative.” Illinois state senator Don Harmon

Harmon joins a growing cohort of state politicians who’ve gone on the record lately in support of medical marijuana as a tool to fight opioid addiction, despite the Justice Department’s recent rollback of Obama-era protections for states that legalized medical marijuana. When Indiana Republican lawmaker Jim Lucas proposed a medical marijuana bill in the fall he mentioned  “possible benefits of medical marijuana as an alternative to opioids.”  In Kentucky, in January, secretary of state Alison Lundergan Grimes cited the opioid crisis when she spoke in favor of a bill proposed there to legalize cannabis, as the AP reported.

While politicians are embracing cannabis, the concept of treating pain with marijuana is still controversial among clinicians.  Aaron Weiner, the director of addiction services at Linden Oaks Behavioral Health and Edward-Elmhurst Health in Chicago’s west suburbs, staunchly opposes it. He fears that a drug that could be helpful for some could fuel addiction in others and lead to increased incidence of car accidents, ER visits, and accidental poisoning.

“In my business, I clean up people’s lives when they fall victim to this stuff,” he said. “That’s part of reason I’m concerned about how we roll this out. It has the propensity to send people to my clinics.”

Of all the uses of medical cannabis, there is a good case for pain, he said, citing findings from a 2017 National Academy of Sciences report that found substantial evidence to support cannabis for treating chronic pain.

But, Weiner’s worried that there’s little evidence in support of the varied cannabis products available. With our current understanding, he said doctors are unable to give medical guidance, leaving patients to resort to trial-and-error.“

Are you using an oil? Are you eating it? Are you smoking it or vaping it? These things actually matter in terms of whether or not a substance is efficacious,” he said.

Some proponents of medical marijuana cite a 2014 study that found a decrease in fatal opioid overdoses in states that permitted medical cannabis. But Weiner said the study does not establish a cause-and-effect relationship; the decline could very well be explained by concurrent efforts to get doctors to prescribe fewer opioids.

When it comes to the proposals to include pain treatment in Illinois’ medical marijuana program, Weiner worries that doctors may be too quick to deem a patient’s pain is “intractable” and recommend marijuana before exhausting other possible treatments, including physical and occupational therapy, injections, and cognitive behavioral therapy.In short, Weiner fears the policy is getting ahead of the science.“That’s always a recipe for disaster because we don’t know what we’re getting into,” he said.

Dr. Leslie Mendoza Temple, a family medicine physician in Chicago’s north suburbs, takes a different view. She has helped more than 400 patients get access to medical cannabis for approved illnesses. For patients who qualify for Illinois’ pilot program, Temple said she considers cannabis when she finds that other treatments, including non-addictive ones, are not working.

“In my business, I clean up people’s lives when they fall victim to this stuff. That’s part of reason I’m concerned about how we roll this out. It has propensity to send people to my clinics.” Aaron Weiner, director of addiction services, Linden Oaks Behavioral Health & Edward-Elmhurst Health

“I’d love that nobody needed anything addictive, that would be really great,” she said. “And then I would have to wake up and realize that’s a dream.”

She agrees that there is not the kind of high-quality data and randomized trials on medical marijuana that exists for FDA-approved drugs. But with opioid death rates climbing every year, she said her approach is harm reduction.

“I don’t think we have the time to wait for those beautiful trials to come out in ten or twenty years,” Temple said. “We have people dying now.

“I can’t just throw up my hands and say, ‘I’ve got nothing… come back in ten years,” she said.

She said she’d like to see better research but the problem is that medical marijuana is classified as a Schedule 1 drug, considered, along with heroin and LSD, to have no medical use and high abuse potential. That makes it hard to carry out cannabis research.

“It’s a Catch-22,” Temple said. “Our hands are tied as a scientific community for studying this in people.”

Temple understands Weiner’s concern over patients having to use trial and error to determine what works for them. But she’s optimistic medical cannabis can work because she has seen so many patients do well once they’ve figured out their regimen.

“I think being doom and gloom about it is wrong if you haven’t seen patients and gotten the story,” she said.

“I don’t think we have the time to wait for those beautiful trials to come out in ten or twenty years. We have people dying now.” Dr. Leslie Mendoza Temple

For many of Temple’s patients, and for Lenkart, cannabis has been a game-changer.

Lenkart finally got a medical marijuana card after his diagnosis of stage 4 pancreatic cancer, but he wishes he’d had it sooner.

“It took me basically a death sentence before I could have a chance of getting a marijuana card,” he said. “I truly believe if I would’ve had access to medical marijuana five years ago, by this point I would’ve been off of opioids, or very minimal.”

Lenkart is concerned about the widespread unwillingness of providers in central Illinois to help even qualifying patients access medical cannabis. He hopes shifting attitudes about marijuana will make it easier for other patients to find relief.

Powered by Illinois Public Media/WILL, Illinois Newsroom provides news about Illinois & in-depth reporting on Agriculture, Education, the Environment, Health and Politics.
PrevPreviousSchools Are Using Poverty Simulations To Build Empathy. But Do They Work?
NextEven With No Budget, Illinois Spends And SpendsNext

Tuesday, July 5, 2022 Today’s headlines: One witness to Monday’s Highland Park parade shooting was marching in the event when she heard what she thought

HIGHLAND PARK – Nicolas Toledo wasn’t sure if he wanted to go to the Fourth of July parade in Highland Park. He used a walker and