MADISON — Illini football tripped out of the gate and never found its footing in a season-opening 45-7 drubbing at Wisconsin last night.

The Badgers dominated both sides of the ball, led by quarterback Graham Mertz, who converted 20 of his 21 passing attempts for 248 yards and five touchdowns — tying the all-time Wisconsin record in his first college game.

Barnes also tallied a game-high 11 tackles while filling in for linebacker Jake Hansen, who left the game in the first quarter after a blow to the head left him stumbling for balance.

“You can take some big hits, and at the moment it can look pretty bad, but Jake is fine right now,” Smith said. “He’s not a guy who’s had a whole lot of concussions. A player’s health is at the forefront of everything we do, so he won’t be coming back out there, of course, until he’s good to go health wise.”

Peters was one of three Illini quarterbacks to play, but the only one to complete a pass. He converted 8 of 19 throws for 87 yards. Backup Matt Robinson didn’t attempt a pass, but got sacked once and carried the ball for 8 yards on his other rushing attempt.

The nominal third-string quarterback is Isaiah Williams, whose three passing attempts resulted in no completions and one interception.

Peters was surprised that Williams got so many snaps.

“The amount that he was in caught me a little bit off guard,” Peters said. “Coming into the game, it was only supposed to be, like, three or four plays. It’s tough sometimes to get into a rhythm, you know, you just get thrown in there on fourth (down) and two (yards to go), and you haven’t been in there the whole drive.” 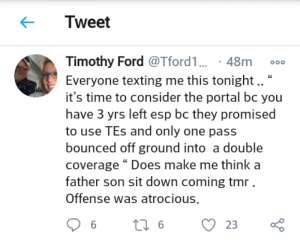 Dissension in the ranks went beyond Illini players. Tim Ford, father of star tight end Luke Ford, who transferred from Georgia after one season, tweeted after the game that “it’s time to consider the portal,” meaning look for another program. Ford senior added “makes me think a father son sit-down coming tomorrow.” That tweet has since been deleted.

Luke Ford played, but did not start and did not catch a pass.

The Illini return to action on Halloween, with an 11 a.m. kickoff against Purdue, in Champaign.

Rob McColley covers University of Illinois sports for WILL.

SPRINGFIELD – A $15 million state investment at the Old State Capitol in Springfield means more renovations to the historic site. The funding will help pay