URBANA – Meteorologists in Central Illinois are warning people to stay weather aware for strong to severe storms on Monday afternoon and evening. A tornado watch has been issued for Northern Illinois and parts of western Indiana until 9:00 p.m.

Meteorologist Andrew Pritchard, who forecasts the weather for Illinois Public Media, says the primary time frame for any severe weather in East-Central Illinois arrives between 3:00 p.m.-9:00 p.m. Damaging winds and isolated tornadoes will be the primary hazards with the strongest storms as they quickly move northeast. 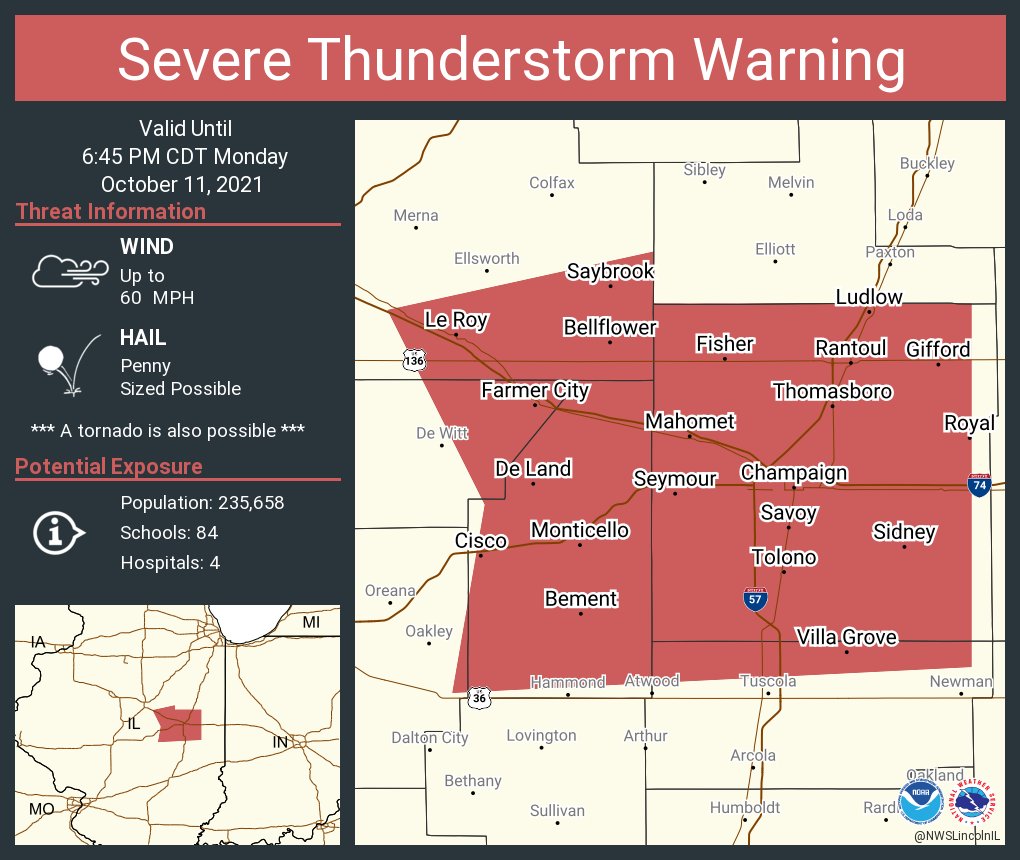 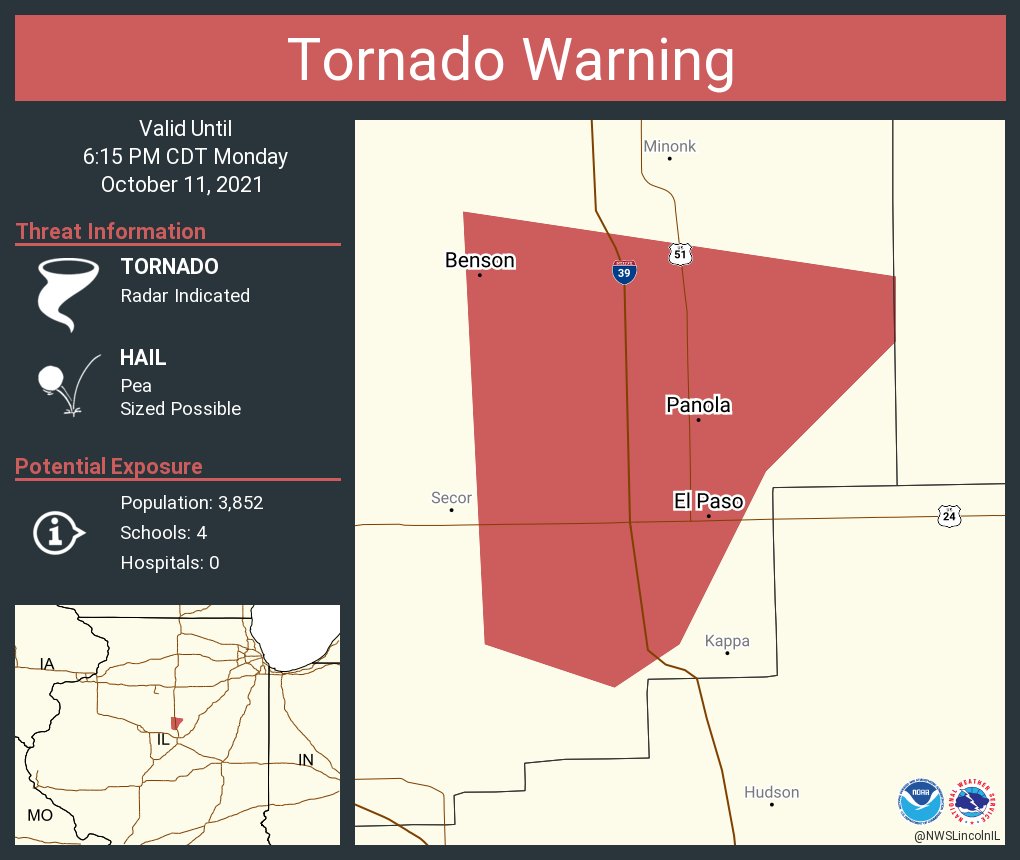 ALEXANDER — A reported tornado has damaged a semi-trailer on Interstate 72 in central Illinois as a line of storms rumbled across parts of the state. National Weather Service meteorologist Alex Erwin says a storm spotter reported seeing a twister cross the freeway Monday afternoon near Alexander. Alexander is west of Springfield. Another spotter reported seeing a tornado about 3:30p.m. near Roodhouse, southwest of Springfield. A line of thunderstorms was moving quickly Monday afternoon through that part of Illinois. Erwin says the weather service has not yet confirmed the reports of tornadoes. A tornado watch was issued for portions of north central and northeast Illinois and northwest Indiana as part of storms that also moved through the region. – Associated Press

5:17 pm — Added Bloomington, Normal and areas north of there to the Severe Thunderstorm Warning. Potential for 60 mph winds and brief tornadoes. #ILwx pic.twitter.com/qrjEhdtr9H 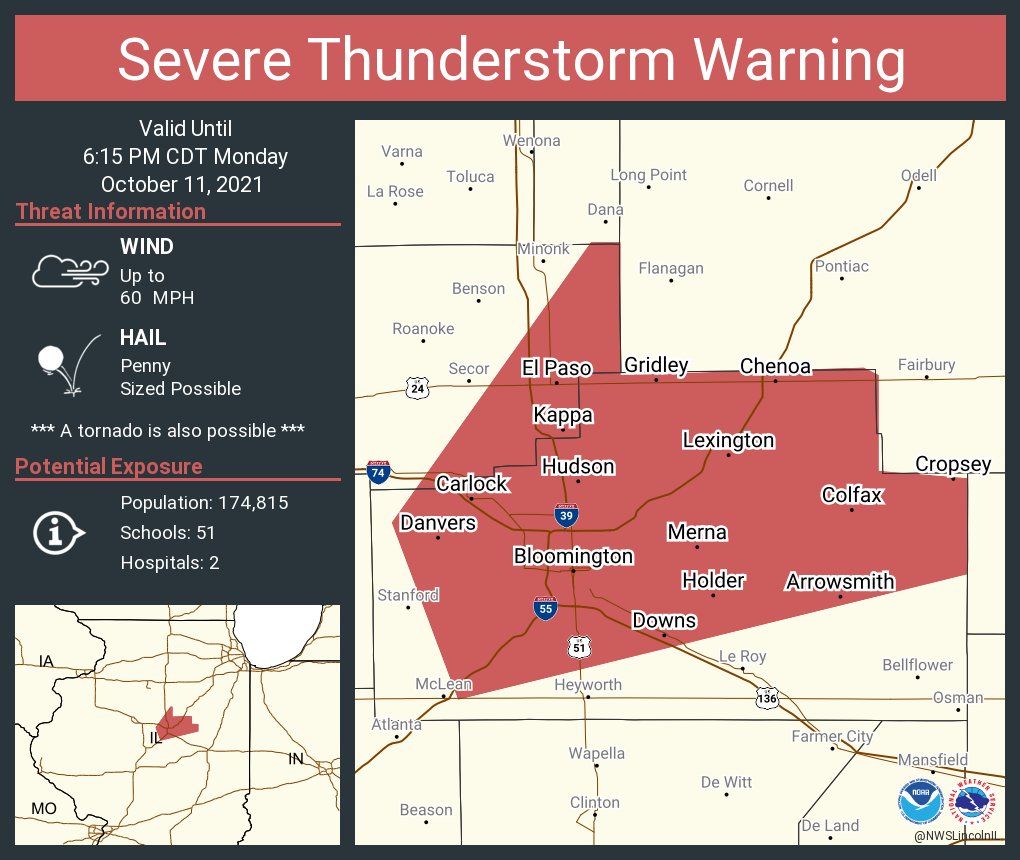 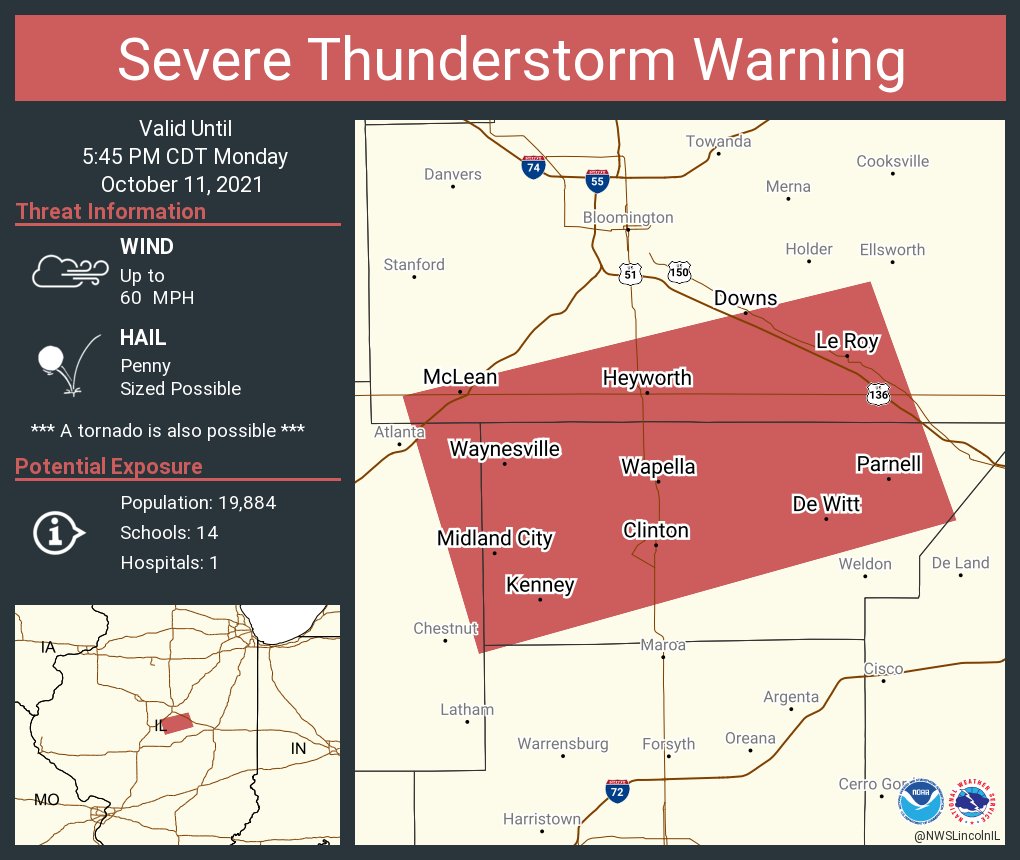 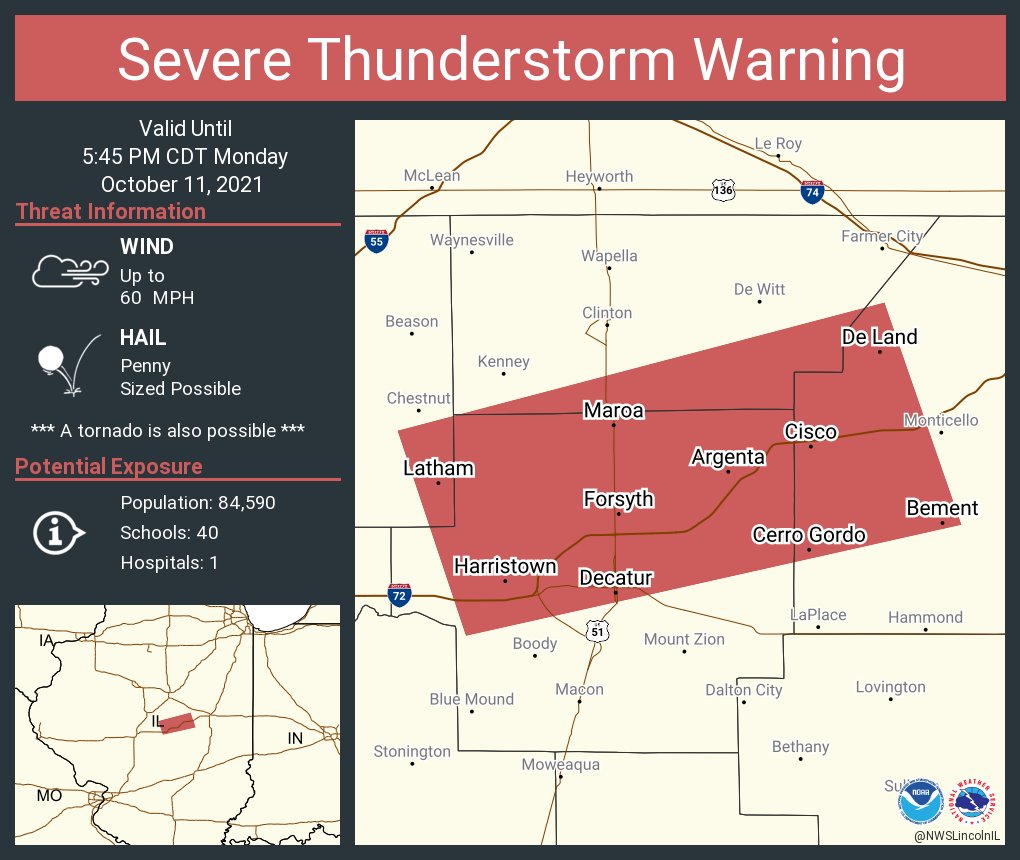 3:09 pm — Tornado Watch has been issued for much of the northern half of Illinois until 9 pm. #ILwx https://t.co/PznDZGZ55R

We're monitoring storms ongoing across central IL right now, but also keeping an eye on the storms approaching from the west, which could pose a severe threat this afternoon and evening. Storms are moving fast today, so be prepared for rapidly changing weather conditions #ILwx pic.twitter.com/vDeHUraFnl

South winds will gust 30 to 40 mph today ahead of a cold front. Temperatures will remain above normal, but several degrees cooler than recent days due to increased cloud cover along with scattered showers and storms. #ilwx pic.twitter.com/YEPltmnkmm

Good Monday morning! Scattered showers and storms are back in the forecast today, and there's a slight risk (Level 2 of 5) a few storms could become severe this afternoon & evening. pic.twitter.com/MJQhCM7Cct

A strong cold front will move into the region today bringing scattered showers and storms. Some storms could be severe during the afternoon to early evening. Damaging winds will be the primary threat, but an isolated tornado cannot be ruled out. #ilwx pic.twitter.com/sxwM5D8XCh

The National Weather Service in Central Illinois tweeted that storms with possible tornadoes, large hail, and strong wind gusts are possible west of I-55 after the noon hour on Monday and east of I-55 between 4:00 and 7:00 p.m. The Weather Service also expects south winds with 30 to 40 mile per hour gusts ahead of the cold front’s arrival. 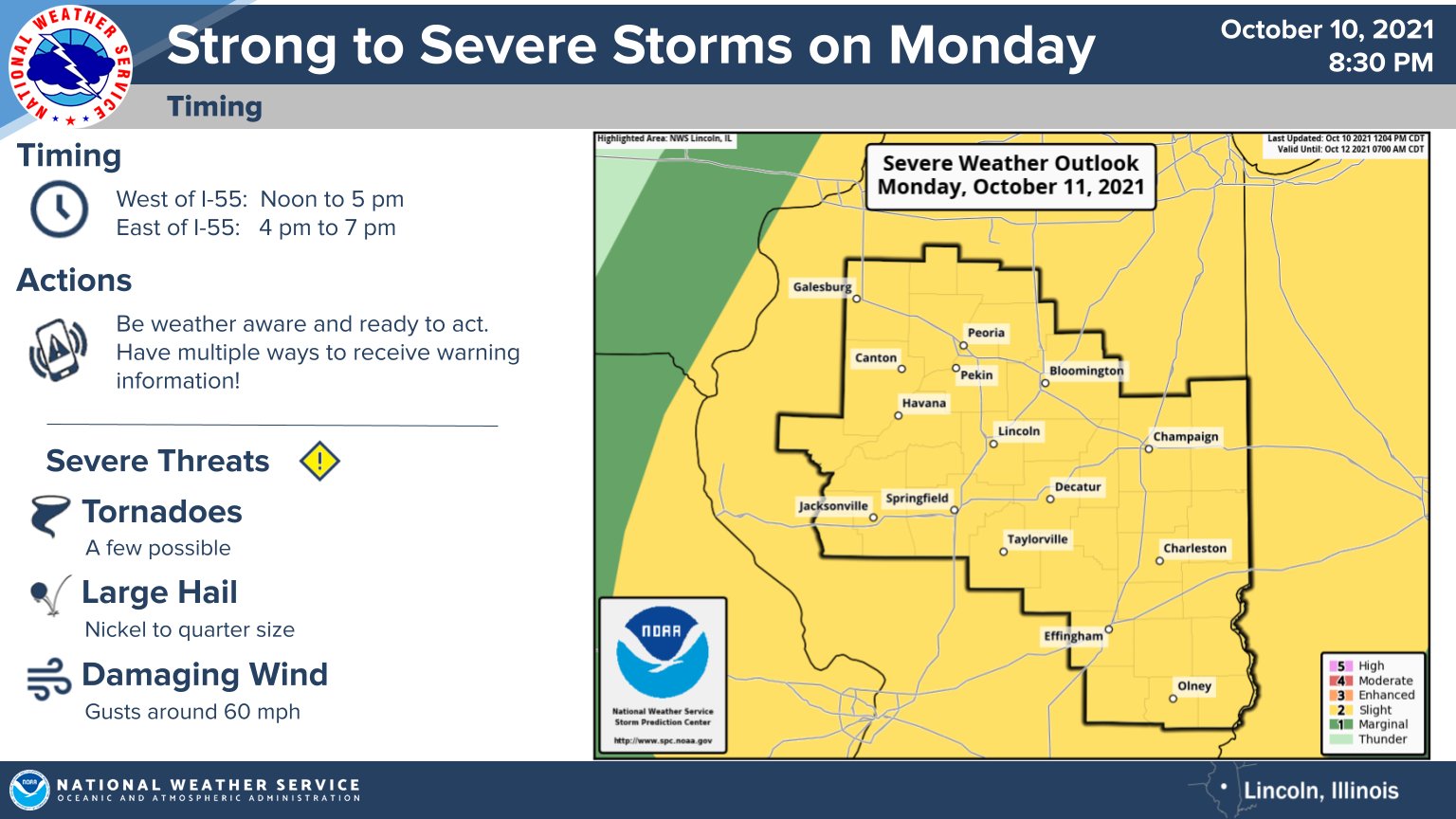 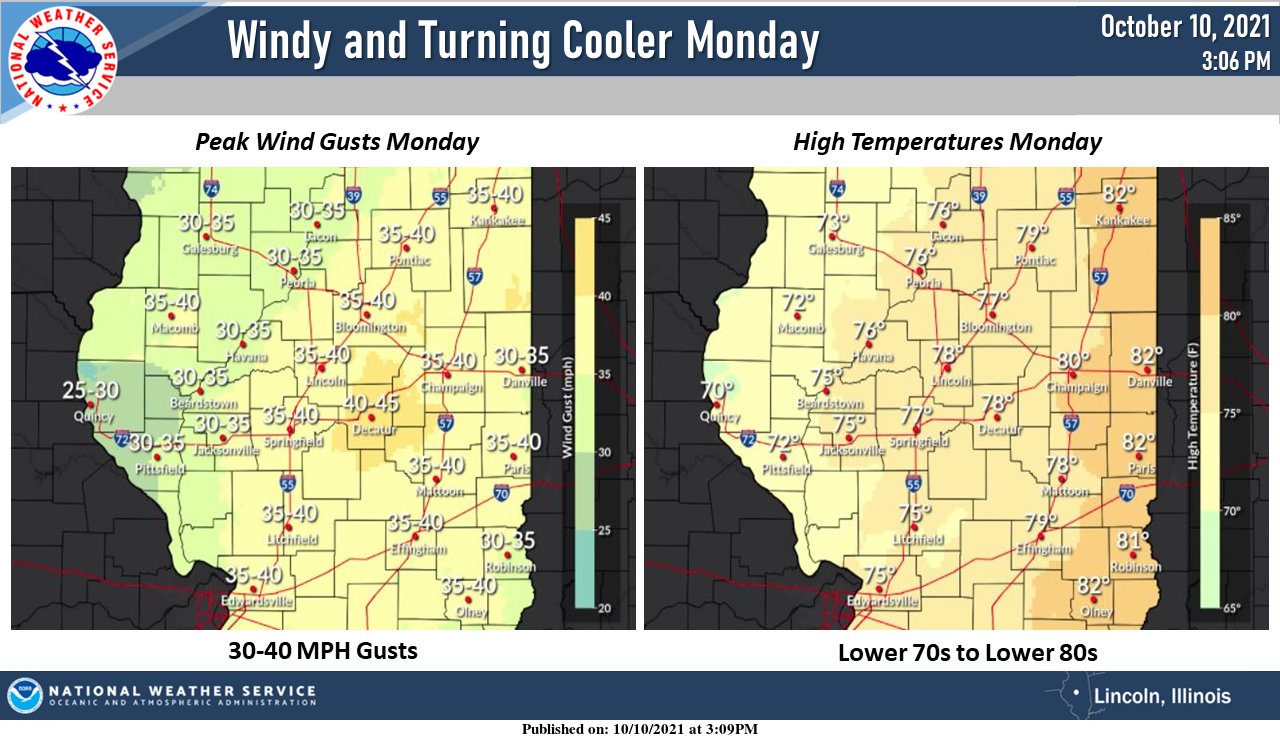 Reginald Hardwick is the News & Public Affairs Director for the Illinois Newsroom. He started at WILL in October of 2019 after serving as News Director for WKAR in East Lansing, Michigan. Previously, he was a news producer and manager at the NBC station in Dallas, where he won 7 Emmy awards. Born in Vietnam, Reginald is a graduate of the University of Northern Colorado. Email: rh14@illinois.edu Twitter: @RNewsWILL
PrevPrevious217 Today: Monday, Oct. 11, 2021
Next217 Today: Tuesday, Oct. 12, 2021Next