PEORIA – The start of high school basketball in central Illinois is on the horizon, and a timetable has been set for football, volleyball, soccer and other sports.

The Illinois High School Association on Wednesday announced its revised calendar for the remainder of the academic year after COVID-19 restrictions put activities on hold for most of the winter.

“We’re incredibly grateful for what’s ahead of us,” IHSA Executive Director Craig Anderson said in a news conference following a meeting of the Board of Directors to finalize the updated schedule.

“We’re glad to have a plan in place and look forward again just to seeing our kids back enjoying the experiences of competing against one another. That really is the aim of our board as you look at what they’ve prepared, it was really about getting students back engaged.”

Under IHSA guidelines, all student-athletes and game personnel will be required to wear masks. Anderson said the IHSA has not been told by the Illinois Department of Public Health that participants will need to be tested for COVID-19.

“We feel like, leaning on our Sports Medicine Advisory Committee and now with a guideline being offered from IDPH for us to go forward, that we won’t have to require testing and we can go forward as planned,” he said.

Classified as a high-risk sport, basketball was able to return to practice earlier this week when the IDPH advanced Region 2 – which includes the Peoria and Bloomington-Normal areas – to Phase 4 of the Restore Illinois plan for COVID-19 mitigation. The IHSA’s timeline allows games to begin after teams have completed seven practice dates.

The calendar has the abbreviated seasons for basketball seasons and other rescheduled winter sports ending on March 13, with no state series contested aside from virtual competitions for cheerleading and dance.

Football, which is also classified as high-risk, will start practices on March 3 ahead of a six-week season beginning March 19 and ending April 24. Girls volleyball also ends on April 24 after beginning practice on March 8, while the start and end dates for boys soccer are one week earlier. None of the three will have postseason play. Wrestling has been rescheduled to run from April 19 to June 12, with no state finals.

One of the schedule goals for the IHSA was to maximize opportunities for the spring sports that had their entire seasons canceled last year. The seasons for baseball, softball, girls soccer and track and field will run from April 5 to June 19, with the status of state tournaments to be determined.

“I think the board will look at a number of different possibilities for what a state series could look like in those sports,” said Anderson. “So at this point, I just don’t know that we have enough information to share those specifics and possible outcomes.” 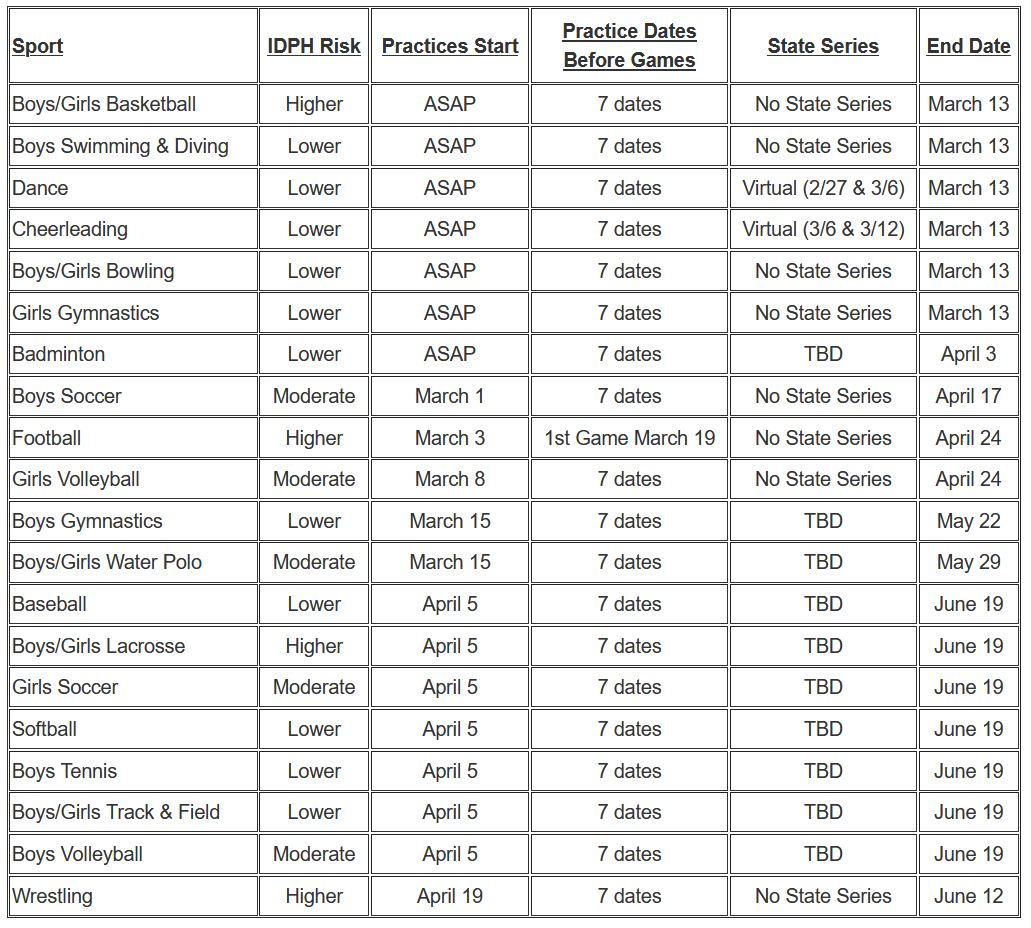 URBANA – The University of Illinois Police Department said it has hired all of the officers needed to help Champaign Police patrol Campustown, the southeastern