High Schoolers To Help At Polling Places In Sangamon County

At the county health building in east Springfield, election judge trainees sit through a presentation and comb through packets of information.

One group at the training sticks out; about a dozen high school students sit together in the back of the room.

The county clerk has recruited about 80 of them overall to serve as judges and registrars on election day.

“It sounds really cool to get to deal with affidavits and credentials – those are all very official terms. It seems very important,” says Noah Fons. He can’t vote in this election, he’s just 17. But he says he’s excited to be a part of Election Day.

The Glenwood High School senior says he heard about the opportunity through a friend. Fons says he’s conservative and would vote for Republican Gov. Bruce Rauner if he could. But he says not all his friends agree.

“They typically share their opinions quite loudly at the lunch table,” he says. “We discuss why we feel the way we feel.”

Those discussions sometimes include Jack Crump – the friend who told Fons about being an election judge. Crump signed up to be one too. He says his views are more liberal. Still, the discussions stay respectful.

While they might not always agree on politics, they do agree on the importance of the democratic process.

“We want to keep this out of politics – to ensure the elections are fair,” Crump says.

Don Gray, the Sangamon County clerk, says encouraging civic engagement is exactly the point of getting young people involved, even ones who are still too young to vote.

“We’re trying to engage a new generation [in] civic thinking, [in] providing their part to really the core fundamentals of our democratic process, which is the electoral process,” Gray says.

County election officials get something too – tech-savvy helpers. 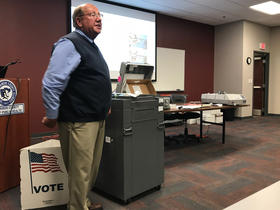 Gray says high school students have served as election judges in the past. But there was a special effort this year to recruit them to be both judges and registrars – who register voters on election day.

Since 2008, Illinois high school students with higher than a 3.0 grade average and permission from their parents can apply to be election judges.

Each polling place is required to have five judges. They represent a political party, either Republican or Democratic. If the students haven’t voted in a primary before – which is how election officials determine which part judges are in – the students select their party.

The high schoolers have the same responsibilities as other judges, like they have to get to polling places at 5 a.m. and stay all day.

Still, there are some perks, as Kimberly Marshall – a senior at Glenwoood – explains:

“So, I get to skip school and make $200,” she says. The other election judges – ones appointed by their parties – they also get paid $200. The money comes from a state board of elections grant.

During the training, the trainer emphasized the decision-making power the judges have and responsibility to keep polling places running well. Marshall says she feels confident she’s up to the task.

“The people who are returning and have done it before will guide me through it – so it won’t be as overwhelming as it would be if I was trying to do it myself,” she said.

So, if you notice a high-schooler helping run things at your polling place this year, no need to worry. They got this.

Health officials remain concerned that too few are getting the new COVID booster shots. The shots have been available since September. In Illinois, just over

It’s turning out to be a bad flu season. Memorial Health reports it is seeing a dramatic increase at its five area hospitals, following national