WEST DES MOINES, Ia. — A lot has changed in Jonathan Miller’s life in the past decade, but one thing that’s remained consistent is his house.

The brick two-bedroom ranch-style house in West Des Moines, Iowa, is filled with Jonathan’s art, photos, puzzles and a substantial collection of University of Iowa gear, like a handmade clock and a LEGO rendition of Kinnick Stadium. Jonathan, who goes by Jon, helped make both. His dad, Don Miller, said he’s a big Hawkeyes fan.

Jon bought the house in 2007 and for three years he put a lot of work into the fixer-upper — repairing storm damage, planting trees in the backyard and completely remodeling the interior.

Then in summer 2010, when Jon was 25, he suffered a major stroke. Doctors diagnosed the cause as advanced testicular cancer, which had metastasized to his brain. One of the tumors in his brain ruptured, paralyzing his left side.

“He asked the cancer doctor — the oncologist — what his chances of living would be. And he said 18 to 20 percent,” Don said. “Jon’s reaction was, ‘Those aren’t bad odds.’ And so I mean, that just showed his willingness to fight.” 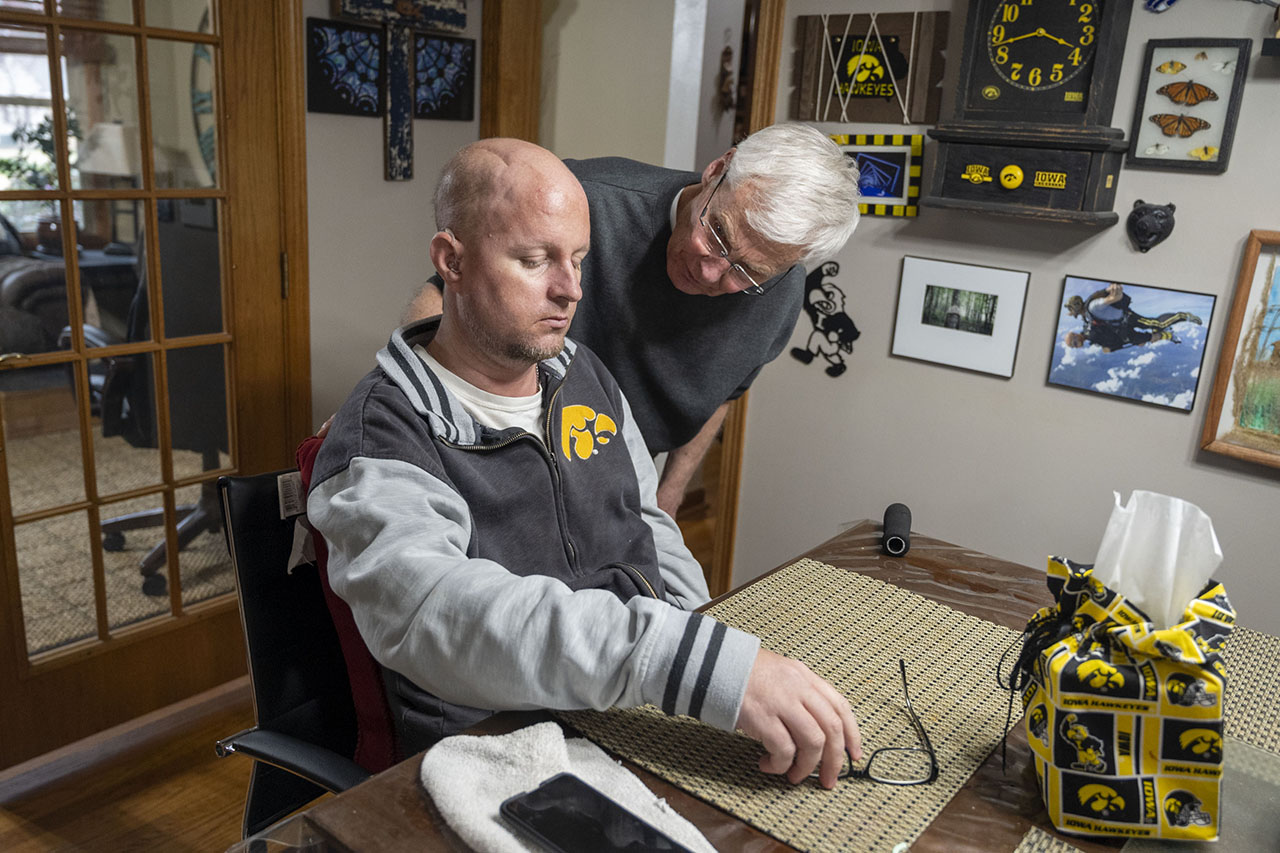 Jon spent a year in Iowa City undergoing aggressive therapy, and against those odds, he survived.

With his son and wife, Laurita, beside him, Don explained that Jon is legally blind and has difficulty speaking, hearing and walking. But he receives several kinds of therapy and is making improvements.

“He can’t stand without someone supporting him and guarding him and guiding him, helping him transition into a wheelchair for getting around,” Don said.

Jonathan has stayed in his house thanks to additions like wheelchair ramps and support bars in the bathroom — and help from home health aides. He needs 12 hours of support a day.

“Jon’s biggest single goal has always been to get to stay in his house,” Don said. “This is Jon’s home.”

But achieving that goal has become more difficult lately. Don said all of the home health agencies responsible for Jon’s care are understaffed, meaning Don and Laurita are frequently rushing over to their son’s house, often on short notice, when there’s no aide available.

As they get older and face health challenges of their own, Don said they’ve been looking at institutional care. Jon, now 36, doesn’t know.

“It put us in a spot where we were and are looking at alternatives that would take him out of the home. It’s the one thing that he wants,” Don said.

More seniors and people with disabilities are choosing to stay in their homes — and with the number of adults aged 60 and older in the U.S. expected to increase 30 percent by 2050, home health aides are predicted to be one of the fastest growing professions nationwide in the next decade.

The federal Bureau of Labor Statistics projects the number of openings for home health and personal care aides will increase nearly 37 percent by 2028 — with Iowa, Indiana and Ohio projected to have some of the highest growth rates in the Midwest.

This means families like the Millers will likely continue to face challenges.

In the U.S., long-term care is going through a process of “rebalancing” overall — shifting from institutional care to more home-based services, said John Bowblis, a professor of economics at Miami University in Ohio.

“In the last 10 years, there’s been this push to try to get people long-term care in a home setting, and particularly their own home,” he said. “And so home health aides play a very important part in allowing people to age at home and stay at home longer.”

But if home health aides remain in short supply, this transition could slow, he said, and favor care for those who have private insurance plans that pay higher reimbursement rates — or can afford to pay higher wages out of pocket.

“If you’re somebody on Medicaid, you don’t have those financial resources that way,” Bowblis said. “And the only solution is to basically either force somebody to go into congregate living, like an assisted living or nursing home, or you’re going to be on a waiting list.” 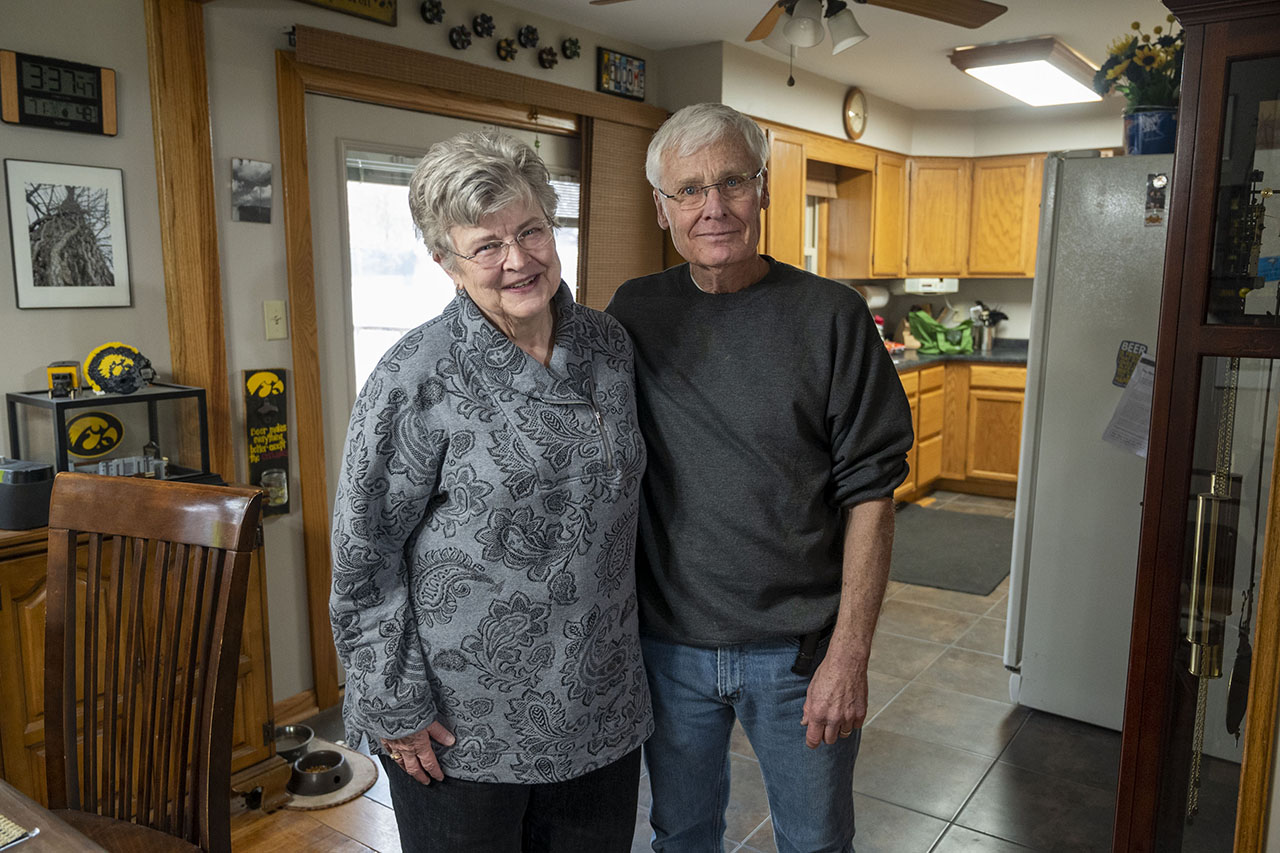 Employers say they’re already struggling to attract serious candidates and worry about how this could affect services.

“I have prepared a letter to let the clients know that we cannot do any homemaking,” said Jodene DeVault, the public health administrator for the Warren County Public Health Department in central Iowa.

She said her agency just hired a new home health aide after trying for weeks to attract candidates in the tight labor market.

DeVault said she worries if this new hire doesn’t work out, she’ll have to suspend homemaking, which is the health department’s most popular service.

Jo Nelson, who runs the Servant’s Heart Home Health Services in central Indiana, said nearly all of her clients are on Medicaid. It means the most she can pay is $13 an hour, as that’s the current reimbursement rate under the state’s Medicaid program.

Nelson said she struggles to retain employees, and she’d like to pay them at least $20 an hour.

“They’re taking care of people’s loved ones in their homes and giving them baths and helping them to go to the bathroom and helping them get dressed and doing things they can’t do on their own,” Nelson said.

Pay remains one of the biggest barriers to attracting more home health aides.

Connie Corchan works in central Iowa for an agency run by a hospital, and she says she loves her job.

“These people are so appreciative of what you do for them. It keeps them in their home — bottom line,” she said. 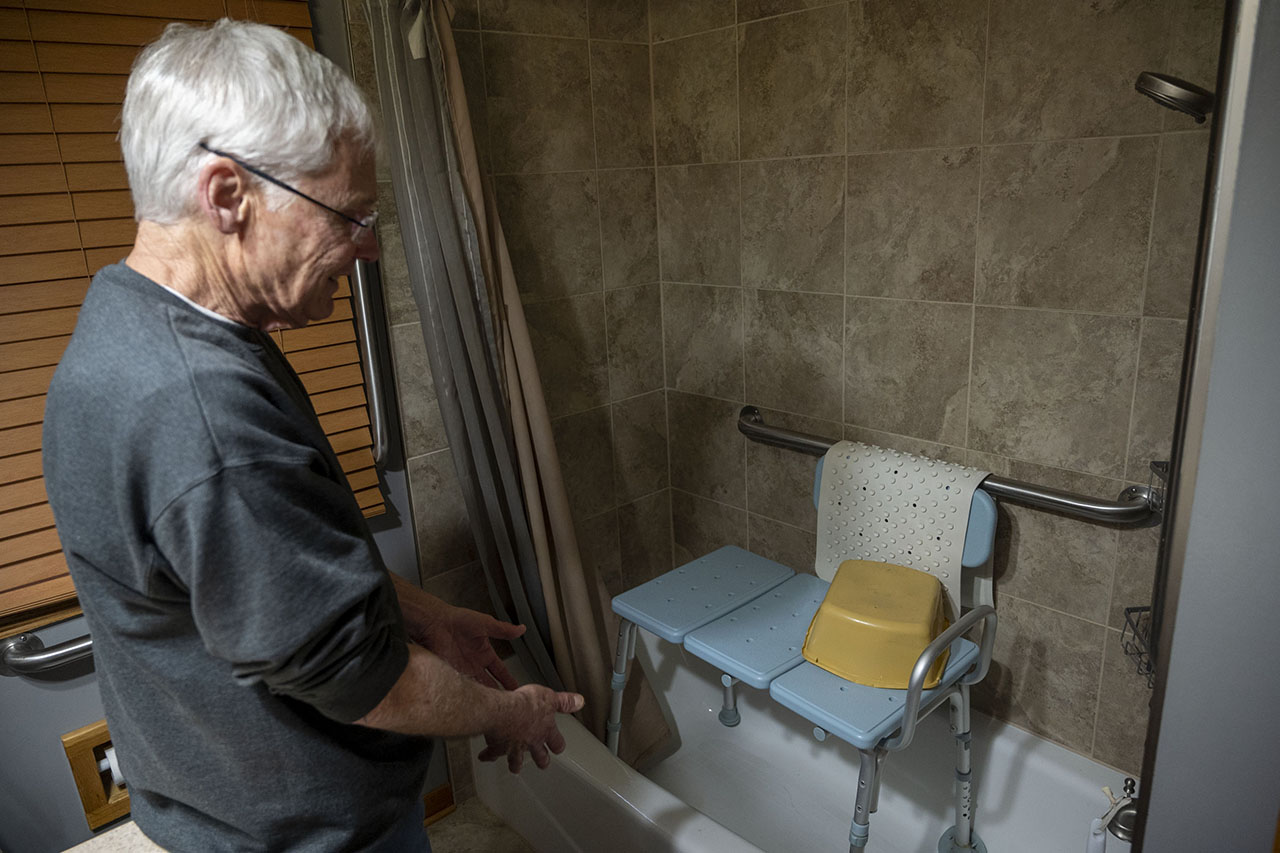 But the work is challenging, Corchan said, recounting a recent day where her schedule was particularly difficult.

“I only had four clients, but they were all two hours each. So there’s eight hours right there. And that’s with no drive time. No break. No lunch. No nothing,” she said.

In her two decades of experience, she said she’s rarely seen other home health aides stay at her agency very long.

That’s because they can easily find less labor-intensive jobs that pay better, she said.

Corchan said it took her 20 years to get up to earning $17 an hour.

“You can drive by McDonald’s and see on their sign what they’re offering,” she said. “And if you have been in direct care for several years, and you’re not even making that, [it] makes you feel terrible.”

The makeup of the home health care workforce plays another part in this struggle, said Rachel Werner, a professor of health care management and economics at the University of Pennsylvania.

Home health care workers are almost 90 percent women, over half are people of color and more than a quarter were born outside the United States, she said.

“Statistics like this really help describe a workforce that doesn’t have a lot of political capital,” Werner said. “And so they’re a pretty vulnerable workforce.”

Jonathan’s father Don said he doesn’t blame the home health agencies for their staffing issues that have made life more difficult for their family. Over the past decade, Don said he’s learned how undervalued and underpaid home health aides are.

“I think it’s one of the most difficult jobs and least respected jobs in the country,” he said. “They’re responsible for the bodily functions of the patient — trying to understand, communicate, watch over, be responsible for. And they’re treated, they’re just the bottom of the economic pole.”

The median annual wage for home health aides is $29,430 a year, according to the Bureau of Labor Statistics. That works out to $14.14 an hour for aides working 40 hours a week.

A 2019 survey by the Iowa Workforce Development found 38 percent of former direct care workers quit the field for a better paying job.

Experts say raising these wages is an important first step, but it’s not the only change that’s needed.

“We can’t rely on especially altruistic people to fill these roles at a great personal cost,” said Stephen McCall, a data and policy analyst with PHI, a group that advocates for direct care workers. 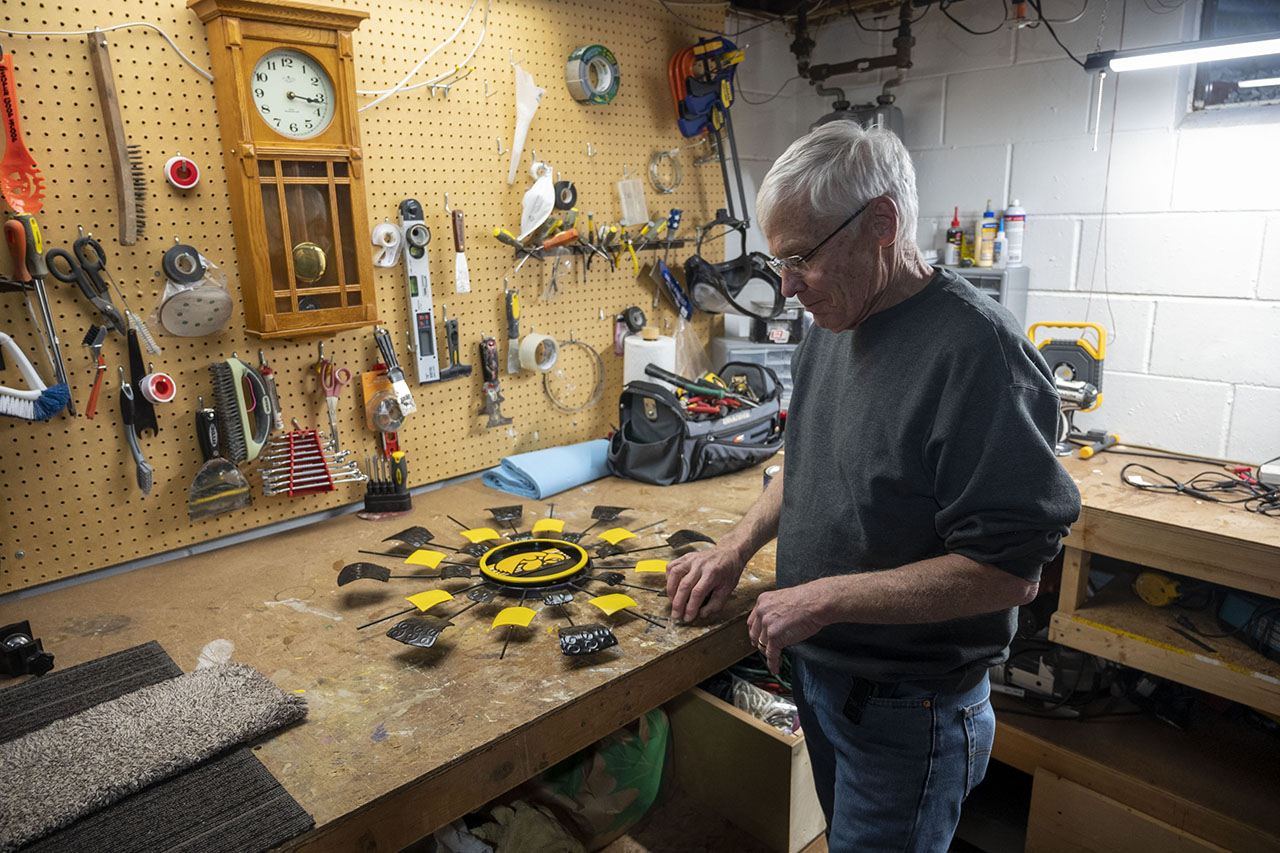 McCall said home health aides need more training opportunities and support to develop specialized skills, and most don’t have career opportunities that would allow them to move up into other related health care or social work positions.

“It means that their skills that they’re developing over time, providing services to older adults and people with disabilities, often go unrecognized and unrewarded,” he said.

Recently some lawmakers have proposed increasing resources to help address this growing shortage.

The Biden administration proposed investing $150 billion towards home health care as part of the Build Back Better Act, but it stalled after Sen. Joe Manchin, a Democrat from West Virginia, withdrew his support.

The Indiana Legislature approved $20 million in 2021 to help those who need home care stay in their homes. Other states, like Minnesota and Iowa, have looked at raising Medicaid reimbursement rates for home health aide pay. A current budget proposal in the Iowa Legislature would raise Medicaid pay from $13 to $16 an hour.

This comes as Iowa is working to increase home- and community-based services for disabled Iowans following a federal investigation last year that concluded the state likely violated the Americans with Disabilities Act for failure to provide enough of these community-care options.

Werner, the University of Pennsylvania professor, said to address this workforce shortage, leaders are going to need to invest a lot more money into resources like Medicaid.

But she’s skeptical that it’s going to happen any time soon.

“It’s not clear to me that the country is ready to make that commitment to invest in long-term care infrastructure,” Werner said. “But I think that’s a big part of what it would take.”

On top of this, she said there needs to be a cultural shift regarding the way society views and values home health care work — and she suspects that will be even harder to accomplish. 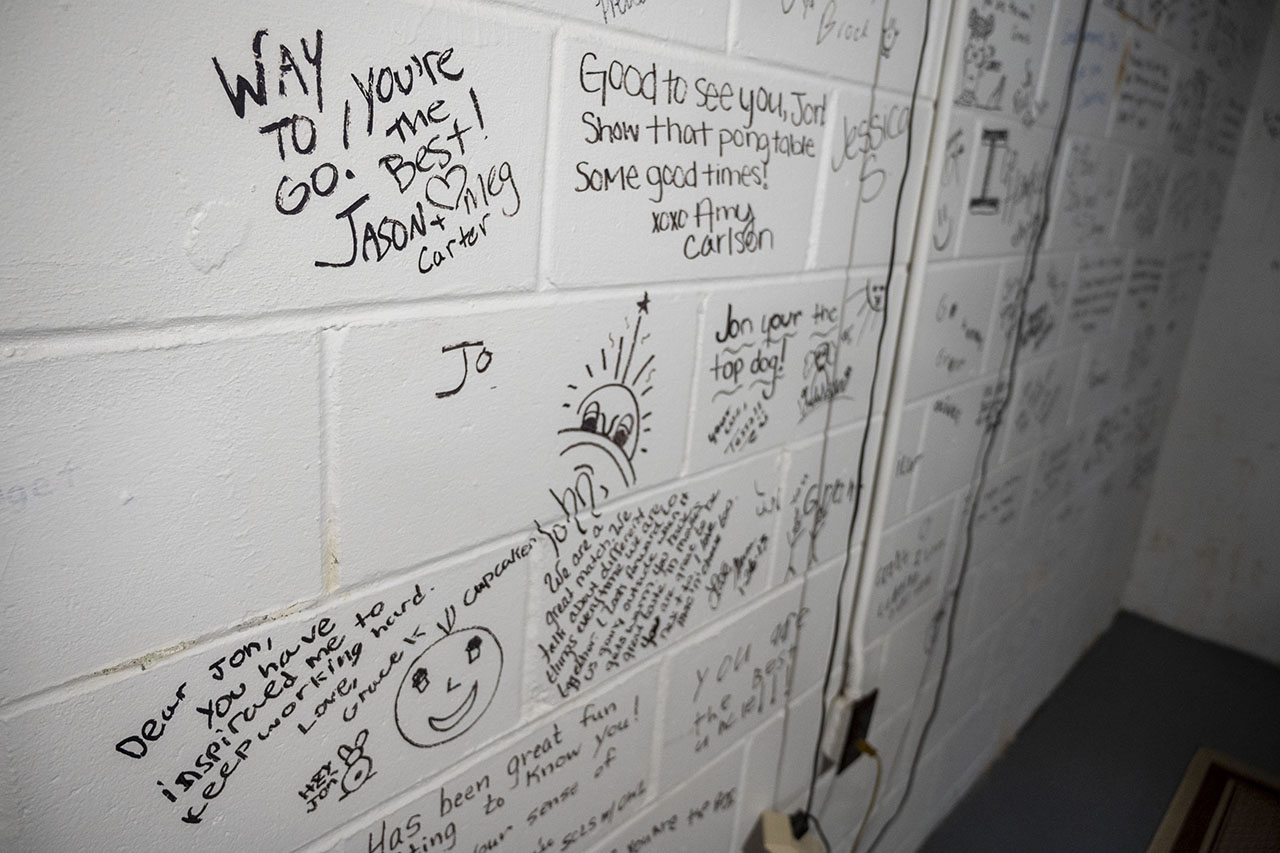 This story comes from a partnership between Iowa Public Radio and Side Effects Public Media — a public health news collaborative based at WFYI. Follow Natalie on Twitter @natalie_krebs.

Side Effects is a health news service exploring the impacts of place, policy and economics on Americans' health.
PrevPreviousWith inflation, Illinois teachers earn less than they did a decade ago
NextStudents protest University of Illinois fossil fuel investmentsNext 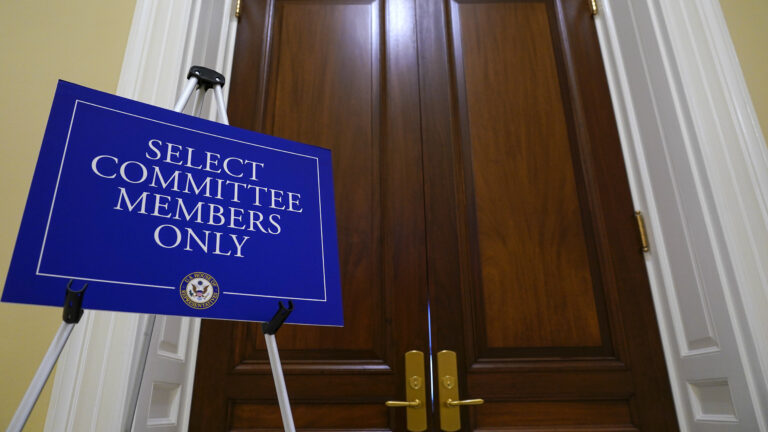 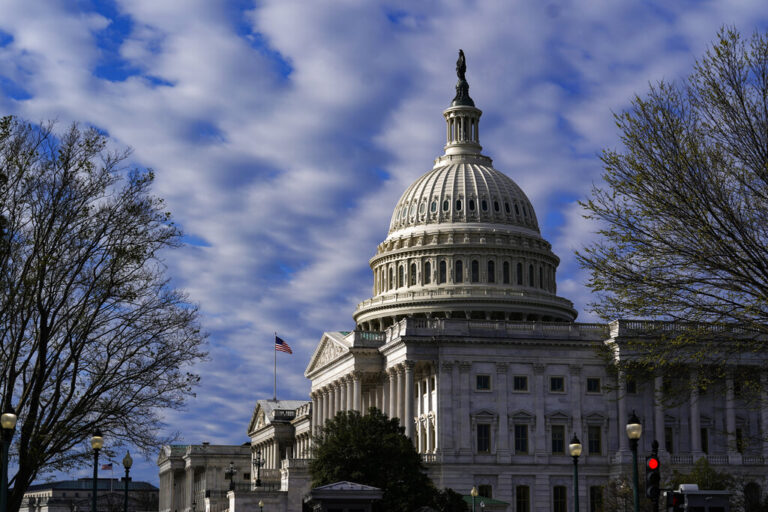 WASHINGTON  — The House committee investigating the Jan. 6 attack on the U.S. Capitol is going public with its findings. The next hearing is Tuesday 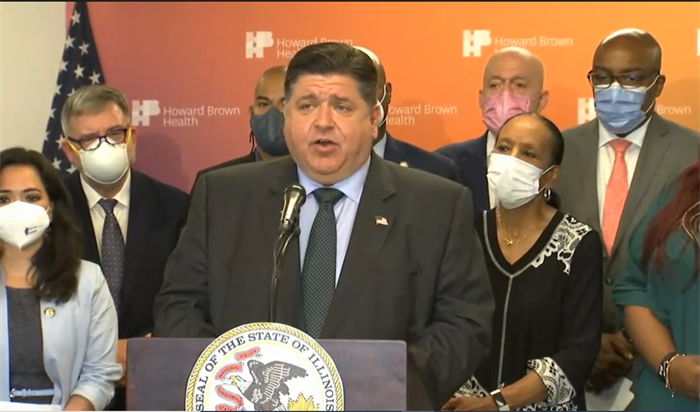 SPRINGFIELD – Gov. JB Pritzker will call a special session of the General Assembly in the coming weeks to focus on legislation to strengthen women’s