How A Robot Could Keep Farmers Out Of Grain Bins

OMAHA, Neb. –A few times a year, farmers have to do a dangerous task; go inside large grain bins to take care of their harvest. Last year, more than 30 of them were trapped inside silos in the U.S., according to Purdue University. Two recent grads from the University of Nebraska at Omaha have invented a grain robot that could help farmers improve their crops and never have to go inside a grain bin again.

When a grain bin is almost empty, farmers strap on a harness and climb inside the metal silo that could be as big as a football field. The only light coming in is from the small hatch at the top. It’s dark, dusty, and loud. Farmers are shin-deep in grain while sweeping and shoveling crops into a spinning auger.

“I kind of compare it to shoveling deep snow off of your sidewalk, but you’re also racing somebody, and it’s also over 100 degrees and dusty and dirty,” Zach Hunnicutt said. “It’s pretty hard work.” 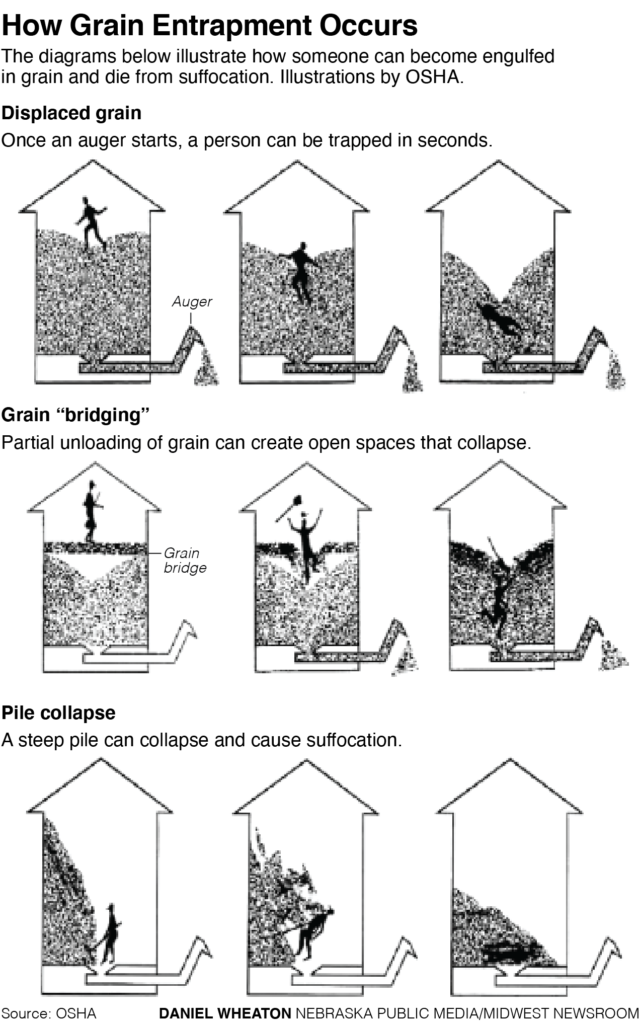 The farmer, who lives near Giltner in south-central Nebraska, said he ventures inside the dangerous environment a few times a year and it’s not a lot of fun. One day, after cleaning out a grain bin, he caught up with Chad Johnson, while playing music at church near Aurora. Johnson’s son had just gone off to college and built a robot for a Chicago startup, then Hunnicutt had an idea.

“I told him that I need you to build me a robot, so I never have to go into a grain bin again,” he said.

He was only half-joking and about three years later, Johnson, his son, Ben, and Zane Zents, Ben’s best friend, took on the challenge and built what they named the Grain Weevil.

The robot is about the size of a small coffee table with blue, spinning plastic augers at the bottom that help move grain. They use a remote control from the outside to move it around.

Ben said the robot scurries through the grain to level it, breaks up crusts, and does inspections.

“But we’re using it to propel our robot as well as manipulate the grain that we’re driving on,” he said. “This allows us to work smarter, not harder. So we’re using gravity and just disturbing the grain enough that it allows the grain to flow more efficiently.”

Neither of them are farmers, but Johnson said they rely on them to understand their work and how important grain bin safety is. He encourages local farmers to fill out their survey and give them feedback on the robot. He said the more they hear from them, the better the product will be in the end.

“We’ve probably met with nearly 500 farmers now in the last year and a half, as we’re going through this process of learning how to build a robot to meet their needs,” he said.

Dan Neenan, director for the Iowa-based National Education Center for Agricultural Safety said farmers need tools that let them do their job without getting into a bin.

The organization also trains fire departments for grain bin rescues. Neenan said the Grain Weevil makes a lot of sense since farmers use augers, which can be deadly. He sees great potential for the robot.

“Inventions like that, people taking a look at what the problem is, what’s causing the injury and what’s causing the fatality, and if we can engineer ways to be able to stop that,” he said, “it really makes the world a whole lot safer.”

Johnson said the Grain Weevil could be in the market in five years and could cost up to $4,000, plus a maintenance fee. Neenan said that’s less expensive than a fine from the U.S. Department of Labor’s Occupational Safety and Health (OSHA) for a grain bin safety violation.

He said if farmers can see the value in the robot, they’ll buy it.

This summer, Grain Weevil is working on farm trials with about 8 farmers from Nebraska, Tennessee, Iowa, and Arkansas to make sure the product works and is something farmers can use. They’ll be collecting data and understanding farmer workflows.

The goal is for Zane Zents to completely automate the robot through an app on a phone.

“A farmer can just go drop the robot in the bin and never think about it again, let it run, do all of its work for the farmer,” he said. “They can drive away and work on whatever else they need to work on for the day.”

There’s another reason why farmer Zach Hunnicutt has a special interest in grain bin safety. When he was a kid, his grandpa’s youngest brother died in a grain bin. Hunnicutt knows a lot of farmers that have been in grain bin accidents, including one who lost several toes while cleaning a silo.

According to Purdue University, since 2019, there have been more accidents in agricultural confined spaces than in mining facilities. The report said on average, about one in five grain bin accidents involved teen boys.

He said if there was a way to take the human element out and not put farmers’ health and lives at risk, Grain Weevil could be a great solution.

“Looking down the road, to think of my kids might never have to go in a grain bin and they’ll be able to manage the grain as effectively or better as we do now,” he said. “That’s a really, really exciting future to look at.”

Hunnicutt said he can’t wait for all farmers to have access to the robot, so they can improve the quality of their work and lives.

SPRINGFIELD – Gov. JB Pritzker and top Democratic leaders in the Illinois General Assembly said Tuesday that while they still plan to call a special