A man won’t get inoculated because he suspects other countries are using Americans as test subjects for their vaccines.

Three-fourths of this focus group gathered at a Liberal community center had heard the shots might contain microchips so the government can track people, even if most said they don’t buy that myth anymore.

The worries are bogus, but they’re worries all the same. And overcoming dangerously misinformed rumors about the vaccine could go a long way to getting more people vaccinated in this community of about 20,000.

The overwhelming concern in the room revolves around a lack of clear information that would build trust in COVID-19 vaccinations.

Rodrigo Calderon said he worries the shots were developed too quickly. He thinks seeing more people get vaccinated might change his mind, but for now, he said: “I don’t plan on taking it.”

Indeed, of the 16 people in the room, just two want a vaccination.

Even as much of the country thrills at the prospect of getting their COVID-19 shots, sizable pockets need convincing. In the immigrant and refugee communities of southwestern Kansas, cultural barriers and access to the shots could leave those hit hardest by the pandemic in ongoing peril.

So town by town, county by county, public health officials find themselves shooting down unfounded fears about the shots that could finally beat back a virus that has killed hundreds of thousands of people in the United States and millions around the world.

“COVID has been very challenging for a lot of people,” said Janeth Vazquez, the marketing director at Southwest Medical Center in Liberal. She convened the focus group. “And so hearing rumors about the vaccine just terrifies and scares them more.”

Vazquez has been promoting social media videos with Hispanic doctors, posters with vaccine facts in Spanish and anything else that might help more people understand the facts about the vaccination process.

Not all of the vaccine myths she’s heard are as easily pushed aside as the conspiracy theory about microchips. Some of the people Vazquez has talked with are afraid the state is working in conjunction with immigration officials.

“So, they’re scared,” Vazquez said. “They’re scared to go get the vaccine because of their undocumented status.”

Among people of color nationwide, there’s also some justified mistrust of how the government has cared for their health over the past several decades — from the Tuskegee syphilis study that withheld medical information and treatment from hundreds of Black men in rural Georgia to the Indian Health Service’s forced sterilization of thousands of Native American women.

Even during the current pandemic, public health agencies have often struggled to close the gap in caring for people of color. The latest U.S. Centers for Disease Control and Prevention statistics show that American Latinos are 2.3 times more likely to die from COVID-19 than their white, non-Hispanic neighbors.

Vazquez is starting to see some of her vaccine-hesitant relatives change their minds as she talks with them. But she thinks it’s going to take time to overcome the many barriers that might keep people in her community from getting a shot. 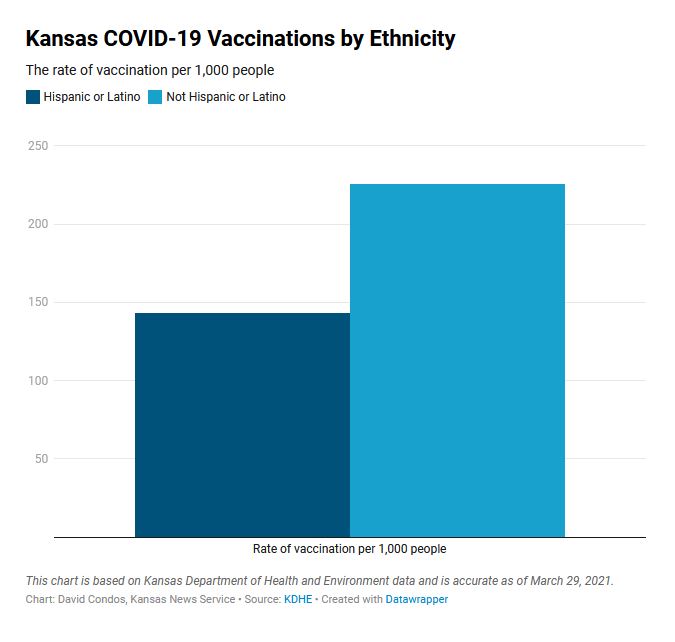 Vaccine hesitancy isn’t unique to Latino communities. A recent NPR/PBS/Marist poll found that 37% of Latinos said they would not choose to be vaccinated. That’s seven points higher than the average among all American adults. But in the same poll, even higher rates of white evangelicals (38%) and Republican men (49%) said they didn’t want the vaccine.

The challenge in southwestern Kansas is that boilerplate public health messages are unlikely to reach many Latinos in a meaningful way.

It’ll take more than merely translating information from English to Spanish. Ernestor De La Rosa, chairman of the Kansas Hispanic and Latino American Affairs Commission, said the messages need to meet people where they are.

“And I don’t necessarily mean by place,” De La Rosa said. “I mean by their thoughts, their culture, how they go on with their everyday life.”

De La Rosa, who lives in Dodge City, said it could be as simple as featuring the voices of native Spanish speakers or playing Latin cumbia music under an ad — anything that lets Latinos know this message is for them.

“It’s not 100% buy-in,” De La Rosa said. “But most importantly, we get their attention and we at least get them to think.”

For towns like Liberal and Dodge City, which are more than 60% Latino, the stakes are high. If messages about the vaccine don’t speak to Hispanic residents in ways that they’ll take to heart, pockets of unvaccinated people could incubate future outbreaks.

In particularly vulnerable populations like Dodge City’s Guatemalan community, the person delivering the message can be just as important as the message itself.

The Rev. Daniel Armenta has been the pastor of Iglesia Bautista Emanuel in Dodge City for more than 30 years. It’s a Spanish-speaking congregation of roughly 100 people. Half are Guatemalan, a group that Armenta said is particularly difficult for outsiders to reach.

“I’ve found that they are very reserved, cautious people,” Armenta said. “They do not want to learn more than what they bring from their land, from their culture, and that makes them very fearful.”

On top of that, he said Guatemalan culture teaches that they should live without vaccinations. So, with help from local government and community leaders, Armenta recently began sharing vaccination information during Sunday services.

“It’s too soon to tell the full story,” Armenta said. “But I think it can work if we give them education.”

When the National Beef meatpacking plant wanted to get more people to line up at its vaccine clinic in Liberal, they invited him to come by and get his shot. On the same day the vaccine focus group met, Franz live-streamed his vaccination to over 20,000 Facebook followers.

But Franz knows that the challenges he and other Latino leaders face in their communities won’t be solved by one social media video.

After getting his vaccination, he went to visit his mother.

His mother doesn’t want to get vaccinated because she’s afraid of fictitious side effects she’s heard about from one bogus source or another.

“How can you fight all this garbage?” Franz said. “I don’t have the answer.”

But Franz plans to keep delivering this message in as many different ways as he can. The same week he got his vaccination, he hosted an interview with an Hispanic doctor, live-streamed from a church that was handing out COVID-19 safety kits and went back to National Beef’s vaccination site for three more Facebook Live videos.

And after he goes back for his second dose, he plans to pay another visit to his mother.

David Condos covers western Kansas for High Plains Public Radio and the Kansas News Service. You can follow him on Twitter @davidcondos.

Harvest Public Media reports on food systems, agriculture and rural issues through a collaborative network of reporters and partner stations throughout the Midwest and Plains.
PrevPreviousRetail Developer Say New Sports Complex Drew Them To Rantoul
Next217 Today: Friday April 2, 2021Next

SACRAMENTO, Ca. — Jacey Cooper is the director of Medicaid in California, and she’s never been afraid of big challenges. She commuted two hours each