“You almost always hear that the people think that there was something wrong — that this person had a mental illness,” said Thompson, who is the executive director of the National Alliance on Mental Illness in Indiana. “And so it becomes something really difficult for people who are experiencing mental health conditions to feel like maybe they’re being connected somehow to these tragic events.”

Ray Lay is one of those individuals who feels the brunt of this stigma.

Lay lives in a tidy brick house on the east side of Indianapolis. His living room is filled with photos and souvenirs from his travels with his wife.

“This is us in the Cayman Islands,” Lay said as he pointed to photos on a side table. “Here I was riding on two dolphins.”

In the backyard, there are five wind chimes that he bought on trips or received as gifts. On a breezy spring day, they combine for a beautiful, relaxing tune.

But his living conditions weren’t always this serene.

“I am a formerly homeless, honorably discharged United States Marine,” he said. “I live with two severe mental illnesses.”

For a long time, he was using drugs and alcohol to cope with his schizophrenia and bipolar disorder. But then he decided to commit to mental health help and it changed his life — he’s now a business owner, recovery support specialist and mental health advocate in Indianapolis.

Still, he sees the negative perceptions of people living with a mental illness. He once had a job as a dishwasher and says he disclosed his mental health condition to his employer. But one day he had an episode and asked to leave work. His manager agreed, but later that day, a co-worker called.

“She said, ‘Ray, they told me to call you and tell you that if you come to work in the morning, they’re going to call the police and have you arrested,'” he said.

That sort of reaction can flare up after a mass shooting. Just like in the shooting that happened several weeks ago at a FedEx facility in Indianapolis, there’s often speculation that the shooter had a mental illness. And that can deepen the stigma that surrounds these illnesses in America.

Nicole Siegel, 38, a marketing specialist in Los Angeles, said she can feel a change in how people treat her after a highly publicized mass violence incident.

“Absolutely I feel a difference,” Seigel said. “A person like myself is basically not trusted. People will think that at any point she could snap or be a completely different person.”

Siegel lives with anxiety, depression and post-traumatic stress disorder. She recently picked up Krava Maga, a self-defense martial art, and she has been enjoying the challenge and social connections at her classes.

Those classes, coupled with therapy, help her manage her illness very well. But the repeated association between mental illness and mass violence makes her life a lot harder — down to things like dating and job hunting, she said.

More than 51 million Americans are living with mental illness in the United States and only 44% receive mental health help, according to federal data.

That kind of undue attention to mental illness after every mass shooting contributes to deepening the stigma and makes people more reluctant to speak up and seek help, Adams said.

“In the United States, we’re such a medicalized society, that we have equated horrendous acts as ‘sick’, and ‘sick’ then ends up translating into mental illness,” said Bernice Pescosolido, an Indiana University professor of sociology. 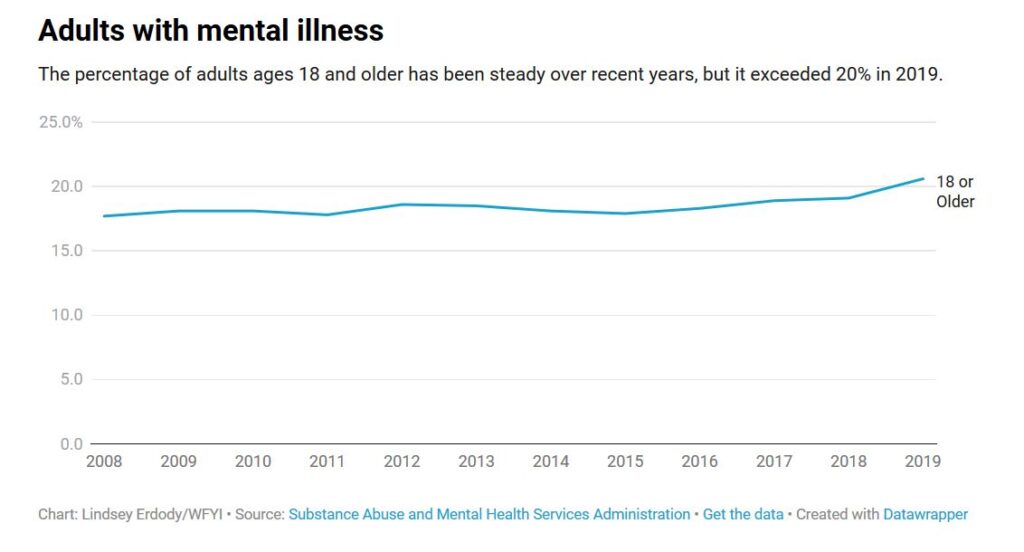 But the link between mental illness and mass violence is actually weak.

An FBI study found that only 25% of mass shooters had been diagnosed with a mental illness. Research also suggests that social, demographic and economic factors are the main drivers behind violence.

Pescosolido said that’s what needs to be addressed.

“The same kind of things that can trigger a mental health problem in a person also leads other people without that vulnerability to the same outcomes,” Pescosolido said.

She points to issues like social isolation, feeling like you don’t matter or don’t belong and bullying as factors at the root of the problem.

‘Please don’t let them blame it on mental illness’

She said that after every mass shooting, in addition to the sadness, her first thoughts can be summed up in two points.

“I hope he’s not Muslim, because that’s a part of my identity; that’s a part of me that’s most visible, because I wear a hijab,” she said. “And then my second thought is, please don’t let them blame this on mental illness. Because then it’s associated more with violence.”

Sahar asked not to be identified by her full name because she is seeking a new job and doesn’t want potential employers to filter her out if they Google her name and discover she has a mental illness.

Mental health experts say that this kind of stigma — and the fear of being perceived as ‘a potential mass shooter’ — runs the risk of making more Americans reluctant to speak up and seek the mental health help they need.