OREGON — Weather officials have confirmed a tornado touched down in northern Illinois damaging homes and uprooting trees. The tornado touched down in Ogle County just outside Oregon around 9 p.m. on Saturday. National Weather Service meteorologist Gino Izzi says it was on the ground for roughly 10 minutes. No injuries have been reported. One home appeared to have lost its roof and windows. Survey teams plan to assess the damage on Sunday. Reports of possible tornadoes also cropped up in Peoria County, where there were power outages, and Henry County. – Associated Press

CHICAGO — Illinois has set new guidelines for schools during the coronavirus pandemic, as it seems more likely remote learning and other changes will continue further into the academic year. The Illinois State Board of Education said late Friday that all districts must implement remote learning plans for all schools starting Tuesday. The board said districts may use online or non-digital learning, such as giving out homework packets. But it said districts must find ways to engage students. Gov. J.B. Pritzker has suspended state-mandated standardized testing, including the SAT.  – Associated Press

DECATUR – At a Friday night news conference, The Joint Crisis Communication Team in Macon County announced the first two confirmed cases of COVID-19 in Macon County. One patient is a woman in her 50s. She is in stable condition at St. Mary’s Hospital according to officials. The second patient is a male in his 60s, who is being quarantined at home. Earlier today, Champaign County reported it has 11 COVID-19 patients. Also, Carle Foundation began on-site COVID-19 testing on Friday for approved patients. Testing is still limited at the guidance of state health officials. – Reginald Hardwick, Illinois Newsroom

CHICAGO — The U.S. surgeon general says Chicago is among a number of American cities identified as a “hot spot” for COVID-19 cases and that it will see numbers continue to rise. Surgeon General Jerome Adams said on “CBS This Morning” on Friday that he is hopeful New York, which has a nation-high 519 deaths and more than 44,000 confirmed cases, will see cases begin to come down next week. He warned that Detroit, Chicago and New Orleans “will have a worse week next week.” Cases in the city and suburban Cook County account for about three-quarters of Illinois’ 3,026 positive tests. – Associated Press

U of Illinois Wants Suit By Slain Scholar’s Estate Dismissed

URBANA — The University of Illinois is seeking the dismissal of a lawsuit filed by the estate of a slain visiting Chinese scholar against two social workers at a campus counseling center. A judge dismissed a federal lawsuit against the social workers in December. But the woman’s estate refiled it in state court in January. Brendt Christensen was later convicted of kidnapping Yingying Zhang. Her body has never been found. The News-Gazette reports that her family has argued that the social workers should have done more when Christensen told them about his fascination with serial killers and that he had bought items to move and dispose of a body. – Associated Press

Updated March 28 at 4:30 p.m. – The Tornado Watch has been expanded to areas along and south of I-70, where it is in effect until 10 pm. In that area, the storms will be capable of producing hail up to golf ball size, as well as a few tornadoes. The greater threat of tornadoes and very large hail will be north from I-70 across central Illinois. Remain alert for severe weather through mid evening, and be prepared to move quickly, as the storms will be traveling around 50-60 mph. – National Weather Service 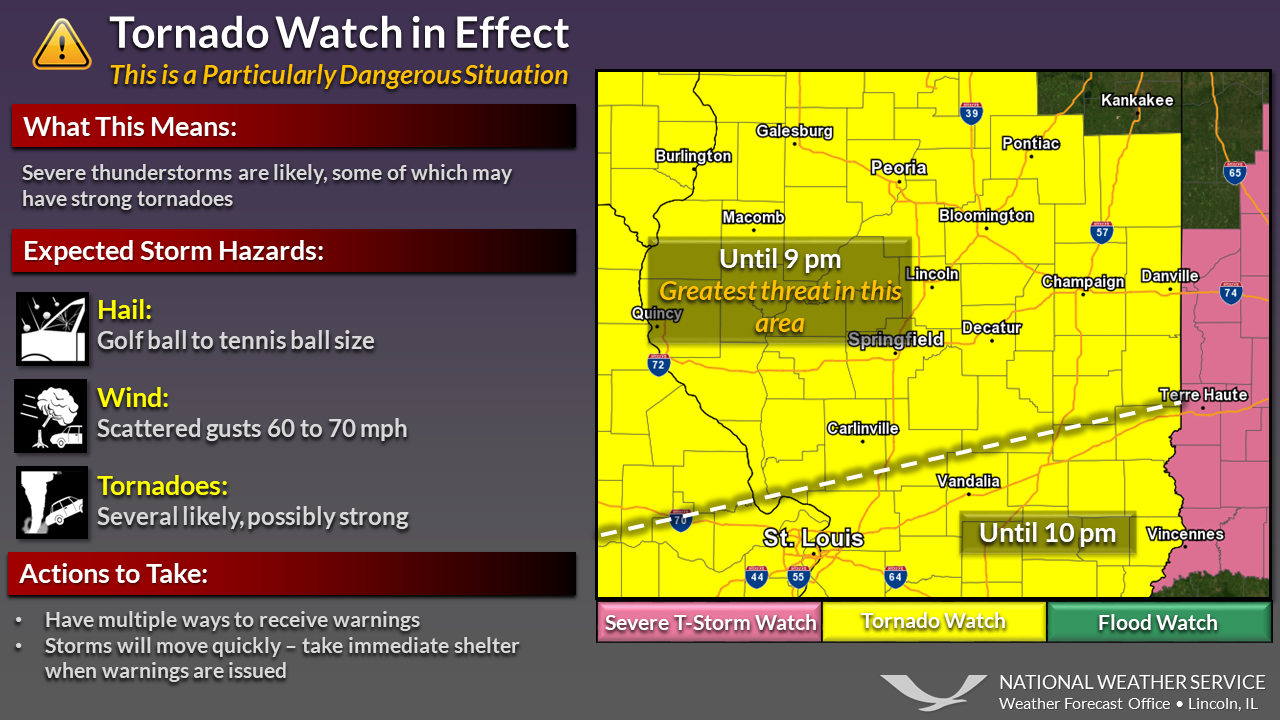 Updated at 12:00 p.m. – An unseasonably warm and humid air mass will move across central Illinois today resulting in a favorable environment for thunderstorm development. Thunderstorms are expected to redevelop this afternoon and evening, particularly 3pm and later. At this time, it appears that significant severe weather is possible, including tornadoes, damaging winds, and very large hail. Thunderstorms will be ongoing in the morning, but the MAIN SEVERE WEATHER THREAT will materialize during the afternoon and evening. Be alert for watches (your first heads-up) and warnings (TAKE ACTION) this afternoon and evening. When you receive a warning, quickly go to a secure shelter in a basement or lowest floor of a sturdy building away from windows and doors. – National Weather Service, Central Illinois 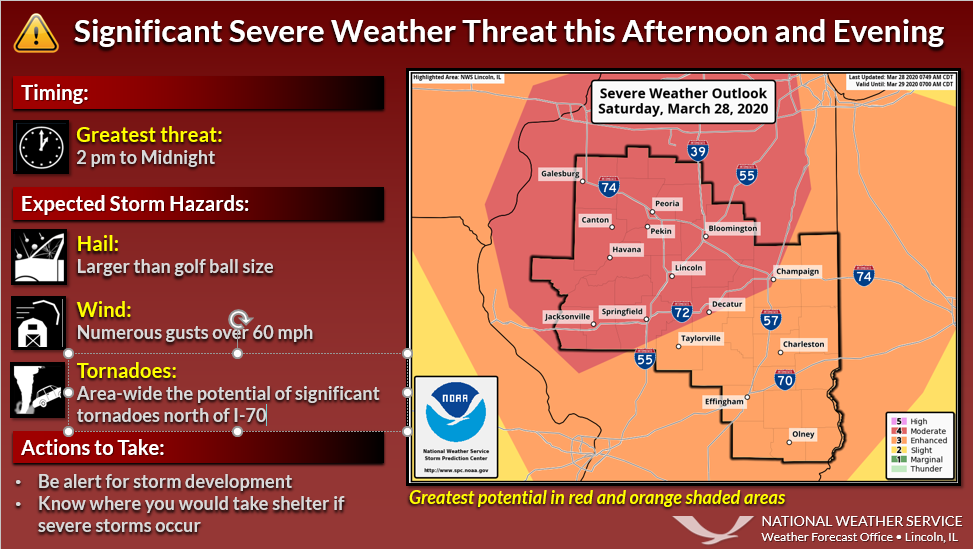 Health officials remain concerned that too few are getting the new COVID booster shots. The shots have been available since September. In Illinois, just over

It’s turning out to be a bad flu season. Memorial Health reports it is seeing a dramatic increase at its five area hospitals, following national