PEORIA — Public university presidents recently wrote Gov. JB Pritzker, asking him to make higher education a priority area for COVID-19 vaccinations. But with only a limited number of doses available, Pritzker said he made the decision to place higher ed staff and students in the 1C class–or at least behind K-12 students.

WCBU’s Tim Shelley recently spoke to the governor about the ongoing vaccination effort in Illinois.

Listen to the full interview here.

Tim Shelley: The university presidents sent you a letter asking why they are not included in the 1B population. What was the reasoning behind not having higher ed in there?

Gov. JB Pritzker: Well, remember, we tried very hard to follow the recommendations of the Centers for Disease Control. They really set out the guidelines for the states, who would be included in each phase, they chose because of the, you know, the fact that there are adults involved in higher education. Mitigations are easier for them to have imposed, that professors and people in higher ed staff and so on, could be put into the 1C category, or at least back behind K-12. Teachers, for example. So we followed the guidelines of the Center for Disease Control, and that’s really why the priorities ended up where they are.

TS: The university presidents say, though, that if they [higher ed] don’t get vaccinated sooner rather than later, they’re concerned that they’re going to be full virtual in the fall semester. And that might result in students choosing to leave Illinois to go to school somewhere else. Is that a concern with you as well?

Gov. Pritzker: We certainly want to make sure that we’re providing all the mitigation that we can, as well as, you know, vaccinations so that kids can go to school in the fall. That I’m not as concerned about, you know, in that timeline.

And before that, you know, one of the things we’ve done is worked with the University of Illinois. They’ve worked with many other universities across the state and colleges to help them set up testing capability everywhere, and that’s really helped the University of Illinois to avoid having many cases. They’ve got a positivity rate, that something like 0.2%, which is, you know, amazing.

As you know, we’ve got a statewide positivity rate, which is much better now. That’s around 4.8%. So, you know, I feel like we’re doing as much as we can at the moment, given that we don’t have enough vaccinations for people who need them right now.

And it’s – I’m very frustrated by that shortage, frankly. And I’ve been screaming as loudly as I can at the federal government and the White House to make sure that we get as many doses as possible, so that we can get them out to everybody that needs them, including those that are in higher education institutions.

TS: On that topic, your administration earlier this week announced the decision to redirect 97,000 of the vaccines at CVS and Walgreens had through the federal partnership for long-term care to 1B, to help get people vaccinate more quickly. Tell me about how you came to that decision?

Gov. Pritzker: Well, one of the things that we discovered is that – the federal government was the one that decided by the way – that how many vaccinations would be reserved for nursing homes and long-term care facilities. And then they took all of those vaccines and put them in a freezer or refrigerator and held them and are doling them out as they have been needing them.

We, and the rest of the states, and all the other people that are getting vaccinated are pushing it into people’s arms as quickly as we can when we receive it. We’re not storing anything for later. So that’s been a bit frustrating.

I must admit, it’s taken a lot of time for CVS and Walgreens to get to all these facilities. They’ll have gotten to every facility once by Feb. 15, so that’s only about 10 days from now. But, you know, we’ve wanted to make sure that we had enough to push out into people’s arms, wherever we could.

So, what we discovered was the federal government counted every bed at every long-term care facility to determine how many vaccinations they would need. Obviously, everybody needs two doses.

Unfortunately, there are many places that have empty beds. And so when you allocate a dose to an empty bed, that’s not going to go into somebody’s arm; it’s going to sit in the freezer. And so we basically went back in and said, “Look, we’re going to borrow these 97,000 doses, because we don’t think you’ll need them.” We’re going to push them into people’s arms. And if we do need them, for some reason, we will have them because we’re getting weekly shipments from the federal government.

So we’re in good shape in that regard, making sure that every person in a long-term care facility will get covered. Not to mention, not just residents, but staff. And that we’re going to be getting back into people’s arms even faster.

TS: Governor, the frustration with the federal [long-term care] program has, you know, it’s not only been you. I’ve heard it from a lot of different places. Has there been any consideration of going the path of, let’s say, West Virginia, and kind of taking our own path?

Gov. Pritzker: It’s funny you asked. So 49 out of the 50 states chose to go the path of the Federal Pharmacy Program. West Virginia is the only one that didn’t. Part of the reason they didn’t is they don’t have very many long-term care facilities. Illinois happens to have more than average per capita, with 1,700 facilities, and many people in long-term care.

But unfortunately, again, that has turned out to be very slow. Why haven’t we just fired them? Basically, the answer is, because that would actually slow it up even more. Taking those vaccines out of their freezers, moving them to some other facility, and then, you know, making sure that we ramp up the number of people who can go into these facilities to vaccinate — that just would take too much time.

So instead, we went back to Walgreens and back to CVS and said, “We’ve got to go faster.” And I have to say, they were very responsive. And that’s one of the reasons why we’ll be done with a first pass on every facility by Feb. 15. There’s been a pretty good uptake.

I want to point out, in those facilities, 85-90% of residents are getting vaccinated. But the folks who work there, staff, are only getting vaccinated about 35-40%. It’s their choice, but we’ve got to get people to agree to get vaccinated. We’re doing everything we can to convince them, going to their union leaders and doing a campaign through them, making sure their supervisors are promoting it, and so on. But there’s more work to do in that regard. And frankly, in the broader population.

TS: There was a story out of Iowa recently, actually, about people coming from Iowa to Illinois to get vaccines and, you know, Illinois has a limited supply of vaccines. So we have Iowa residents using Illinois vaccinations. Is there is there any kind of thought of [requiring] proof of residency in the state of Illinois to get a vaccine here?

Gov. Pritzker: You do have to submit a driver’s license or something, so that your name and information can be put into the system that we need to track and make sure that you get your second dose, and that we’re reporting to the CDC as we’re required to.

But it’s not that many people that are doing what you’re describing, and what we don’t want to do is start, you know, screening everybody and asking them for their papers as they come in to get vaccinated. Look, as far as I’m concerned, I want every Illinoisan vaccinated before everybody else, if I could. But this hasn’t been a large enough problem that we’ve had to, you know, go in and impose new rules.

TS: And I wanted to ask one last question here, about K through 12. It seems like every district I’ve talked to in our area, it’s kind of all up to them to figure out how they’re going to get their teachers vaccinated. Is there a plan for a broader state plan from the State Board of Education on a standardized way to make sure teachers are getting vaccinated in that population?

Gov. Pritzker: We’ll be able to do that, you know, more likely do that when we get more vaccination doses. The fact is, right now, we aren’t getting enough. I mean, that’s why we’ve got mass vaccination sites. That’s why we’re pushing it out as fast as it comes. We can’t really allocate doses and then start traveling right now from school to school to vaccinate people.

Remember, you need people who are qualified to give those vaccinations. And you want to make sure that you’re having the highest throughput of people that you can, you know, per hour per day and so on.

And so yeah, right now, we’re asking teachers to come to the vaccination sites. That is, make an appointment and come. And I wish we had enough that doses to give to everybody right now. But it is going to take some time, again, because we’re not receiving enough vaccine from the federal government and from the manufacturers yet.

Here’s the good news. Tim. It looks like Johnson & Johnson is going to get a vaccine. I’m hopeful anyway, that they’ll get approved by the FDA in the next couple of weeks. And if we have a third manufacturer, and this is a single dose vaccine, that will help an awful lot. And I think that’ll make it at least a lot easier for us to distribute it more widely.

TS: Governor, thank you so much for your time this morning. I appreciate it.

Gov. Pritzker: Thanks, Tim. Always good to talk to you. 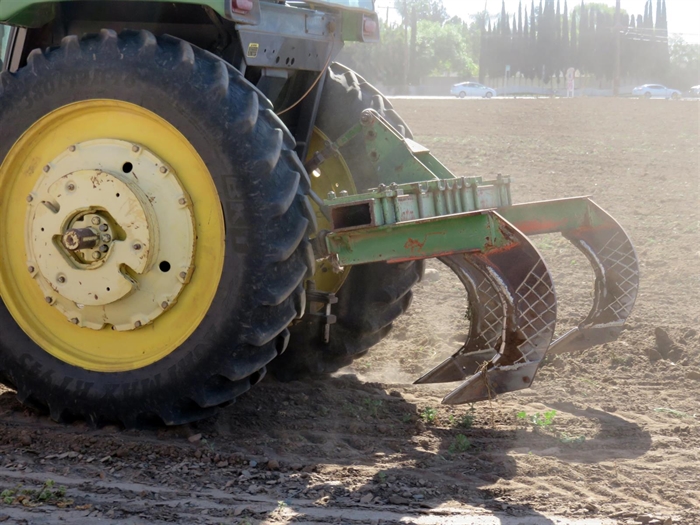 Farmers Ask For ‘Right To Repair’