Illinois Public Media is committed to having calm and comprehensive discussions about reducing gun violence in Champaign-Urbana. Our fourth “News, Brews and Beatz” discussion happens on the evening of Monday, May 9, 2022. Illinois Public Media News and Public Affairs Director Reginald Hardwick previewed the next discussion with Morning Edition host Brian Moline.

Brian: What will be Monday’s focus?

Reginald: We will be talking with 4 professional men who come from all walks of life and have differing views of how to impact this crisis. We’ll talk with University of Illinois Music Audio professor Lamont Holden. He teaches music technology and how to make ‘hip-hop beats’ to U of I students. We’ll speak with Eric Minor, Chief Marketing Officer at the University of Illinois. He grew up in Champaign, pushed by his parents to pursue an education. Also joining us is Samuel M. Smith. He is the Director of Civic Engagement and Social Practice at the Krannert Center for Performing Arts. And we’ll talk with State Farm Agent Joe Stovall. He grew up in Champaign, earned a degree in Chemistry, and worked for Dow Chemical before switching to a career with State Farm. As always, the co-moderator will be Tracy Parsons, Community Relations Manager for the City of Champaign.

Brian: Why talk with 4 professional men?

Reginald: All 4 men have varying lived experiences in growing up in Black communities and becoming successful in their careers. Some of them grew up with 2 parents at home their entire childhood. Some were raised by single parents. One panelist rose from a poor childhood in the South to attend private schools and colleges thanks partly to a teacher who looked out for him. All 4 men have viewpoints of how we got to this point with violence and some solutions that may help end it.

Brian: What is the status of violence in our community currently?

Reginald: According to the News Gazette, the City of Champaign recorded 34 shootings between January and the end of March. That’s down from more than 40 last year. Seventeen people were killed by gunfire last year in Champaign… and 10 in Urbana. Those are all-time highs.

Brian: News, Brews and Beatz started last fall. How have the discussions changed?

Reginald: We’ve gone into all of these forums thinking about the root causes of the violence and having our experts, many who deal directly with children in Champaign Urbana, have the conversation that’s not being heard broadly. For example, our November discussion focused on mental health. Some of the shooters, who are in their teens or early 20’s, have experienced trauma – such as violence in their childhood – and lacked access to mental health services. It wasn’t that their families didn’t care. But affordable mental health care, especially for young adults, hasn’t existed for years. So the violence cycle continues. Earlier this spring, we talked with 4 principals from local schools. They talked a lot about the disconnect many youth feel in this community because there are a lot of resources for university students but not much for young people in elementary, middle and high schools.

Brian: Where can people watch and ask questions on Monday night?

Reginald:  You’re invited to come over to Pour Bros Tap Room in downtown Champaign. Grab a seat in person by 6:00 p.m., the forum starts right around that time. We’ll also stream the discussion on the Illinois Public Media Facebook page and YouTube Channel. If you’re a beer connoisseur, you’re welcome to purchase a cool brew from dozens of pour it yourself taps. If beer isn’t your thing, that’s fine – you can join me in drinking water after all it will be nearly 90 degrees on Monday afternoon! There will also be food to buy from The Stufft Bird in case you’re hungry.

Brian: When does the “Beatz” in News, Brews and Beatz happen?

Reginald:  Before and after our panel discussion, DJ-Icy-Dre’ will spin some old school R&B and Hip Hop. We also take a 15 minute intermission during the discussion. And while DJ Icy-Dre’ is playing the music, a speed paint artist will create art to the music! And also, listen for provocative poetry from artist Missy Richland. So yes, we’ll have important discussions but also have some fun and encourage the conversations to continue long after our microphones are turned off.

Brian: Any arising themes from all of these forums?

Reginald: I don’t want to sound cliché but all of our experts from mental health to schools to a midnight basketball program say Champaign-Urbana needs to allocate resources and people to connecting with young people. That come include Boys and Girls clubs in more neighborhoods or having someone a teen or young adults can call in the middle of the night when they may thinking of shooting or settling a dispute with a gun. 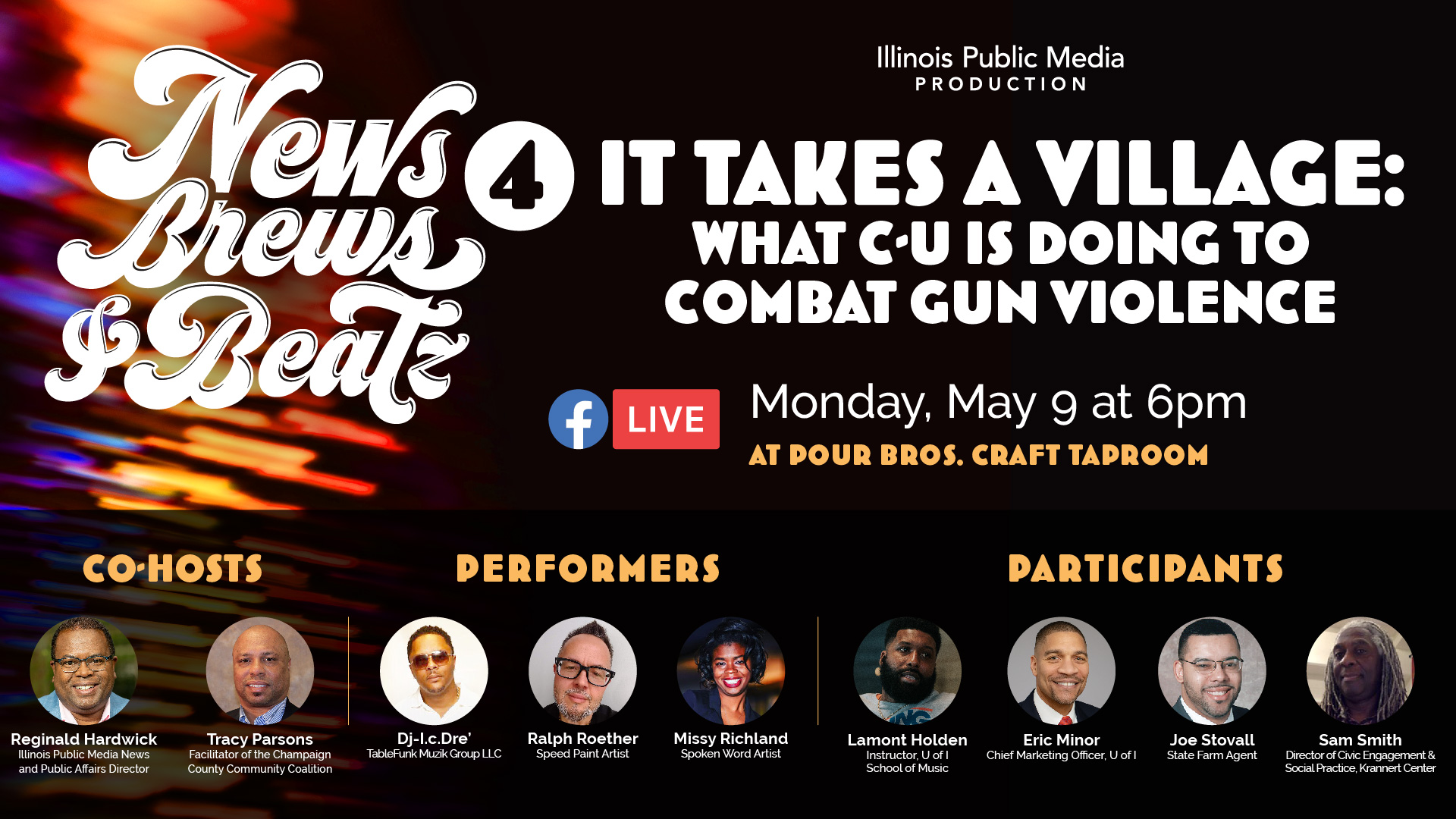 Reginald Hardwick is the News & Public Affairs Director for the Illinois Newsroom. He started at WILL in October of 2019 after serving as News Director for WKAR in East Lansing, Michigan. Previously, he was a news producer and manager at the NBC station in Dallas, where he won 7 Emmy awards. Born in Vietnam, Reginald is a graduate of the University of Northern Colorado. Email: rh14@illinois.edu Twitter: @RNewsWILL
PrevPrevious217 Today: Upcoming New, Brews and Beatz event plans to discuss solutions to local gun violence
NextU of I Latino Age study opens conversation for better resourcesNext