RANTOUL – There’s a three-way race for mayor in the village of Rantoul in northern Champaign County. But that’s not the only contest on the April 6 ballot for Rantoul voters. They will also be voting for candidates to fill every seat on the Rantoul Village Board. And for the first time, they will choose their village board trustees from districts, instead of at-large.

One of the Rantoul residents who’s following the election is Jason Hollis. He lives in downtown Rantoul, and says the town is not at all like the bad things he heard about it before he moved there.

“Yeah, the crime rate and the poverty level and the school systems, I’ve heard all these horrible things,” Hollis says with a laugh. “And this town isn’t that bad at all, if people just come here and visit it — give it a chance.”

Hollis, who is Black, notes Rantoul’s diversity, despite its small size.

As he considers the April 6 election, Hollis says he’d like to see the community provide more activities for young people.

“It’s getting to be nice weather outside,” said Hollis. “So with nicer weather, you’re going to have the kids stirring about. And they need something positive to do, instead of doing negative things.”

Programs for young people and concerns about crime are among the issues being discussed by candidates for Rantoul village board, who for the first time are being chosen from six districts, instead of at large, as a result of a 2018 referendum. That ends a pattern in which trustees have tended to come from more affluent neighborhoods to the north and west.

A Look At Candidates In One Of Rantoul’s New Districts

“I think that they put a lot of stock over in the area near the highway, because that’s what brings in the most money,” said village board candidate Nicole Rabbers. 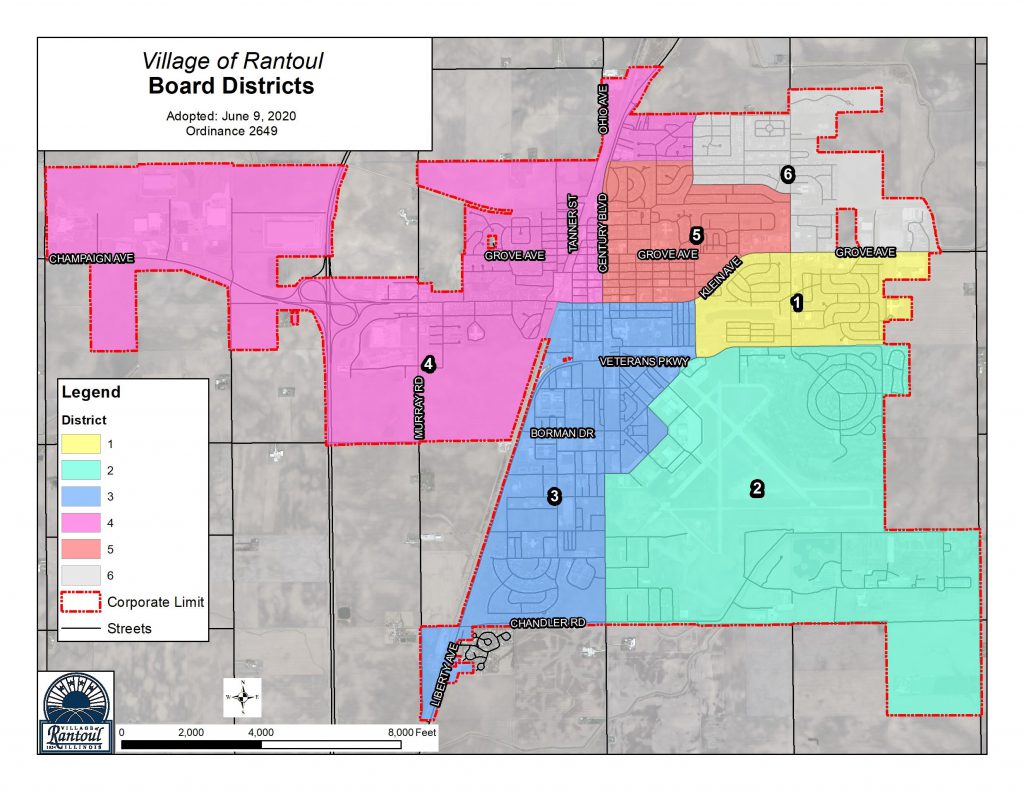 The area near the highway Rabbers mentioned is along I-57, where new facilities have opened, including an industrial park, a hotel and a new outdoor sports complex that officials hope will bring sports tourism to Rantoul.

Meanwhile, Rabbers lives in a subdivision originally built for military personnel on the old Chanute Air Force Base, once Rantoul’s main economic driver. The neighborhood is in Rantoul’s new village board District Two, where Rabbers is running for a trustee seat.

Rabbers says the village has failed to address the neighborhood’s crumbling infrastructure and a growing crime problem.

“I do feel they have neglected other areas in the town that could use some love and attention too,” said Rabbers. A second candidate, Regina Crider agrees.

“I feel like the village has done us a disservice by not continuing to focus on developing the village as a whole, not just one specific part of town,” said Crider, who is pastor of a church that worships at the former Chanute Air Force Base chapel.

Crider is one of five African American candidates running for the Rantoul village board — each of them running in a different district. Under the at-large system, north side candidates dominated the village board and Rantoul never had more than one Black trustee at a time.

Crider and Rabbers are making their first runs for public office. But a third contender in District Two, Herman Fogal, is a former Rantoul village trustee. He has served three non-consecutive terms on the board, with the last one ending in 2015.

Fogal, a real estate agent, says he’s OK with the new district system — as long as everyone pulls together.

“As long as we get the trustees in those districts that look at the overall needs and concerns of Rantoul, and they just don’t look at, specifically the needs in their area and say that’s it,” said Fogal.

Black Representation On The Village Board

Rantoul resident Jack Anderson was active in Rantoul Residents For Representation, a group that organized the referendum that created the village’s new district system. He says the village board’s dominance by mostly white trustees from affluent neighborhoods discouraged Black candidates from other parts of town.

“Now I’ve talked to people of color, and they just basically said, I can’t see myself walking into some of Rantoul’s neighborhoods that are predominantly upper income, and trying to solicit their vote,” said Anderson, a former Champaign County Board member. “I don’t think it’s because people are racist. I think people are just used to what they’re used to.”

Incumbents On The Ballot

The distribution of incumbents and newcomers on the ballot ensures that the election will bring in a minimum of three new members to the Rantoul Village Board, and possibly as many as five, depending on what voters decide.

Electing members of governing boards from districts is a tactic that has been tried in several small towns. University of Illinois political science professor Brian Gaines calls the switch from at-large to district representation a “weak trend” around the country. He says it mostly happens in towns where voters are unhappy with a status quo that they feel doesn’t represent them.

“It’s usually only if someone’s feeling like the system isn’t working for them that you end up with a movement to change the rules,” said Gaines.

That was the case in Rantoul, according to local activist Debbra Sweat. She was another organizer of the village board district referendum, and remains active today in Rantoul Residents For Representation. She believes the new system will bring fresh talent and viewpoints to Rantoul’s village government.

“It’s a younger generation that’s coming in, said Sweat. “And I’m hoping it brings more diversity, which reflects our community, new ideas, accountability, transparency and respect for your constituents, which has not been exhibited in a very long time.”

As for Rantoul resident Jason Hollis, he says he doesn’t have a strong opinion on whether village board districts are good for Rantoul.

“It really doesn’t make a difference to me,” said Hollis as he brought groceries up to his downtown apartment. “But if it’s going to be a great move for the community then I’m all for it.”

Jim Meadows has been covering local news for WILL Radio since 2000, with occasional periods as local host for Morning Edition and All Things Considered and a stint hosting WILL's old Focus talk show. He was previously a reporter at public radio station WCBU in Peoria.
PrevPrevious217 Today — March 30, 2021
Next217 Today — March 31, 2021Next

SPRINGFIELD – A $15 million state investment at the Old State Capitol in Springfield means more renovations to the historic site. The funding will help pay