The new information included the names of businesses receiving loans under $150,000 and the specific loan amounts for businesses that received $150,000 or more. The loans were granted beginning in April 2020, and applications were approved up until early August.

In total, 1,855 businesses in Champaign and Urbana received $193,622,604 million in loans last year. The goal of the program was to cover lost wages of employees as a result of the COVID-19 pandemic. The loans are forgivable under certain terms.

The SBA had refused to release the detailed information in the fall, citing privacy concerns, although it has routinely released that kind of information – and more – on other loan programs. The Washington Post and other news outlets sued the SBA, and a judge ruled the SBA had to release business names and specific amounts by December 1.

A review of the data for Champaign and Urbana businesses showed:

Under the program’s rules, businesses can apply for forgiveness of the loans, which were made through SBA-approved lending institutions. Busey Bank gave the most loans at $65,404,831.

Full-service restaurants was the industry that received the most loans going to 88 restaurants. Real estate agents received second-most at 72 loans, and beauty salons received the third-most number of loans at 57 loans. 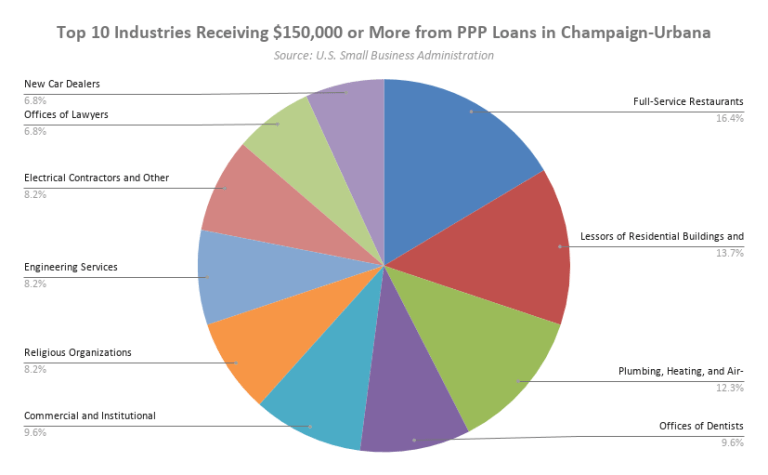 Restaurants such as Dos Reales and Papa Del’s Pizza were the most common business type to receive a loan under $150,000. Lessors of residential buildings and dwellings such as CPM Management and The Bromley Group were the second most 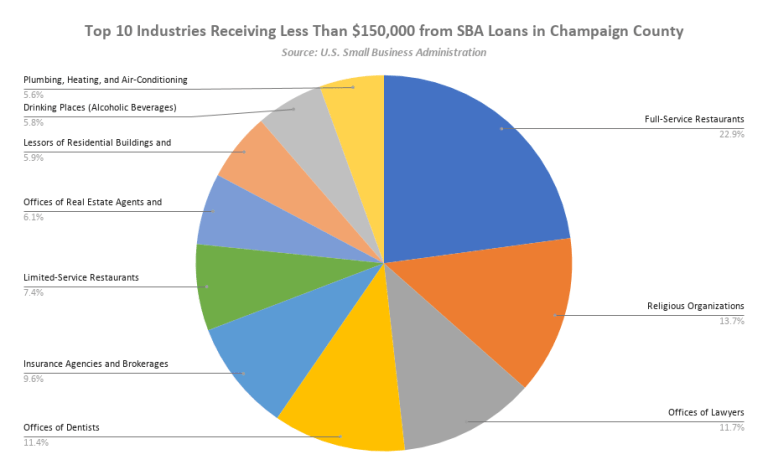 Full-service restaurants received the most from SBA loans under $150,000 according to data released December 1, 2020.

Busey Bank, headquartered in Champaign, issued the most loans under $150,000 with 389 of the almost 1,600 loans coming from them. First Federal Savings Bank of Champaign-Urbana and Mattoon-based First Mid Bank & Trust each issued 84 loans.

Timmie P. Punkay, a sole proprietorship that received a $1,500 loan, reported the most jobs, with 160.

Most businesses did not provide information for gender of ownership.

Certain businesses that previously received a PPP loan may be eligible for a “second draw” loan. The Second Draw PPP Loan applications opened up on January 13, 2021. More information on COVID-19 relief and SBA programs can be found on its website.

CU-CitizenAccess is an online newsroom devoted to community and watchdog reporting by journalism students at the University of Illinois in Urbana-Champaign. Visit online at www.cu-citizenaccess.org