ROCKFORD – Sandra Martell is in a tough spot. As public health administrator in northern Illinois’ Winnebago County, Martell was threatened with lawsuits from several area bar owners after she included them on a list of businesses allegedly defying the governor’s orders to halt indoor dining.

The county is part of a region that faced tougher restrictions this month after the rate of positive COVID-19 tests rose above 8%.

At a news conference this week, Martell pleaded with businesses to spare the local health department from spending precious resources trying to police the contentious mandate.

“Our team spends more time having to do this than I really think that we would want to be spending our public health resources on,” she said.

Martell faces a dilemma: She can issue closure orders to non-compliant businesses, but without the backing of law enforcement, nothing more will happen. And the county sheriff — and local politicians — have publicly encouraged businesses to defy the state’s orders.

Across the U.S., some public health officials are finding themselves in a similar position, finding their hands tied as they urge residents to comply with public health orders without local leaders backing them up. And the situation can vary widely within a state — as it has in Illinois.

Winnebago County Sheriff Gary Caruana has said he doesn’t dispute the effectiveness of mask-wearing, but he does take issue with some of Illinois Gov. J.B. Pritzker’s other state mandates.

Caruana told a packed crowd of business owners earlier this month that he won’t enforce measures temporarily banning indoor dining in the region. Caruana did not respond to a request for an interview for this story.

A hard job — even with local support

Public health measures — including the enhanced COVID-19 restrictions taking effect in some parts of the state — have the full effect of the law, shesays.“So I don’t know how they’re getting away with it really, except for nobody has the time to go after them.”

The job of local health official is hard enough, even with the “ton of support” she has from local leaders and the business community in Champaign County, she says. Many of her colleagues — in neighboring counties and elsewhere — aren’t as lucky.

“I can’t imagine doing [this job] where you’re fighting against the people in your community,” Pryde says. “It’s horrible. And we’re losing public health people all over the country… we’re losing good public health talent, because they cannot deal with this.”

At least 49 state and local public health leaders have resigned, retired or been fired since April, according to a review by Kaiser Health News and The Associated Press. Many report being vilified, threatened with violence or suffering from burnout.

COVID-19 cases are also on the rise in Champaign County, like the rest of the state. But the county’s death rate is less than a quarter of Winnebago’s, according to data compiled by Johns Hopkins University and analyzed by NPR.

Pryde believes preventive steps taken early on — in coordination with other local entities — have saved lives in her county.

The University of Illinois at Urbana-Champaign runs a massive, mandatory coronavirus testing program and works with Pryde’s agency on contact tracing. And at the start of the semester, campus-area bars and restaurants willingly shut down indoor dining for weeks, Pryde says, going beyond the state’s mandate at the time.

In an interview with NPR on Wednesday, Illinois Department of Public Health Director Dr. Ngozi Ezike said she estimates only about half the state is implementing public health orders.

“It’s quite a struggle,” Ezike said. “We want to focus our energy on educating the public and getting the right data to them. But instead, we’re now dividing our efforts on two fronts, trying to combat people who are actively working against what will keep our community safe.”

The problem with indoor dining

Closing down indoor dining is often among the first steps taken when COVID-19 cases are rising. State leaders cite research studies, including a report from the U.S. Centers for Disease Control and Prevention that suggests gathering without masks to eat and drink is inherently riskier than other activities.

The CDC analysis found people who tested positive for the coronavirus were about twice as likely to have reported dining at a restaurant than those who tested negative. While other indoor activities can be made safer with mask-wearing and social distancing, it’s not possible to dine while wearing a mask.

Doug Larson, co-owner of Joe’s Brewery in Champaign, says he came to understand this issue early on through conference calls with local health officials and university scientists — and that’s why he chose to stick with outdoor-only service even when it wasn’t required.

“The longer we can keep people outside, the better,” says Larson, who estimates his business is bringing in 75% less revenue than last year.

Joe’s Brewery has since reopened for indoor dining, which is still allowed in the Champaign region as of Friday, Oct. 30.

But Larson tries to operate as safely as possible, following advice from a university researcher: spacing out the tables, running fans to increase circulation and cranking up the heat so they can leave the doors open. 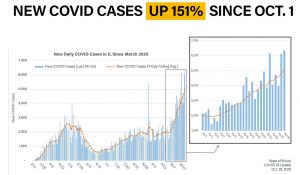 Some Republican lawmakers in Illinois say it’s not fair to single out bars and restaurants in public health mandates. They say they’re not convinced indoor dining is to blame and that the governor’s office has not been transparent about the data being used to drive the decision-making process.

“So far, there’s no proof that restaurants are mass spreaders of this, and particularly if they were reduced to 25% occupancy,” Senate Minority leader Bill Brady of Bloomington said in a virtual news conference Wednesday.

“I think you’re going to get many state’s attorneys and many local governments that are just not going to enforce it, because it just isn’t right,” he said.

Michael Leifheit, owner of Irish Rose Saloon in Rockford,is glad local politicians are speaking out against the mandate.

“That’s why I, like a lot of other people, chose to disregard it,” Leifheit says. “We’re not bad people. We’re people who have our entire life savings and everything invested in our businesses.”

Several restaurants in Rockford this week announced permanent closures due to the stresses of working through the pandemic. Local leaders have raised concerns that targeting bars and restaurants will only hurt the local economy without achieving the desired goal of reducing the spread of the virus.

Larson, in Champaign, feels for business owners who are struggling.

“I sympathize because, especially small ‘mom and pop’ restaurants are going to go bankrupt and they’re never going to come back,” he said. “We probably need to think about bailing [them] out… so they don’t feel forced to [stay] open.”

In an interview on The 21st show, Gov. Pritzker encouraged businesses that are struggling due to COVID-19 restrictions to apply for business interruption grants from the state. He said $220 million is still available.

Concerns for the future

In Illinois, the daily rate of new COVID-19 cases has more than doubled in the past month. Since Oct. 1, the number of COVID-19 patients hospitalized has risen 73% and the number of deaths from the virus is up 82%, according to the state.

With cases rising — and a lack of a unified front among leadership in places like Winnebago County — there’s concern that the local health care system could be overwhelmed and more people will die from the virus. 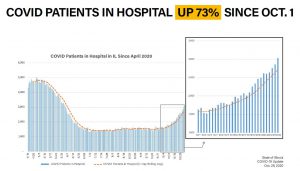 The ban on indoor dining in the northern Illinois region will continue until the positivity rate for coronavirus testing drops below 6.5%. Winnebago County is now seeing more than 100 new daily cases, with more than 13% of coronavirus tests coming back positive, Martell says.

As the virus spreads in the community, it’s getting harder to keep it out of nursing homes, where elderly residents are more vulnerable to hospitalization and death, she adds.

“Cases are aged 1 year to 96 years, and I keep reminding: There is no age that is spared.”

“Nothing good ever comes of that,” she says. “It’s very frustrating because it is costing tens of thousands of lives.”

This story was produced by Side Effects Public Media, a news collaborative covering public health. Christine Herman is a reporter at Illinois Newsroom and Chase Cavanaugh is a reporter at WNIJ.

Christine Herman is a Ph.D. chemist turned audio journalist who covers health for the Illinois Newsroom. Her reporting for Illinois Public Media/WILL has received awards from the Illinois Associated Press Broadcasters Association, the Public Media Journalists Association and has reached both regional and national audiences through WILL's health reporting partnership with Side Effects Public Media, NPR and Kaiser Health News. Christine started at WILL in 2015.
PrevPreviousWith Trick-Or-Treating Limited By COVID, Some Turn To Outdoor Haunts
NextCOVID-19 Impacts Illinois School Data Collection, Including Attendance RatesNext

Fully Vaccinated Illinoisans Can Ditch Their Masks In Most Circumstances: Pritzker

SPRINGFIELD — Gov. JB Pritzker on Monday said Illinoisans who are fully vaccinated against COVID-19 no longer need to wear face masks in most circumstances.

SPRINGFIELD — Gov. JB Pritzker announced Monday the state will plan to “phase out” its moratorium on pandemic-related evictions by August and launched a new