Expanded voting-by-mail is coming to Illinois. Governor J.B. Pritzker said Friday he will sign the expanded voting measure into law.

The State Legislature sent the Democratic-backed legislation that its supporters say could make for safer voting if there is a COVID-19 outbreak this November. It passed both chambers along partisan lines with Republicans saying it is costly and ripe for fraud.

A group of Democratic women lawmakers pushed most of the voting bill’s provisions. It will expand vote by mail opportunities in the state, with the idea that doing so would reduce crowds at polls this fall and prevent the spread of the COVID-19 virus.

“[We want to make sure] everyone who wants to vote has the opportunity to vote, and does not have to choose between their vote and their safety. None us know what our landscape is going to look like in November”, said Democratic lawmaker Katie Stuart of Collinsville.

Republicans are not so sure. They said they support getting people to vote, but are fearful parts of the plan could lead to fraud. One area of concern is a provision to allow counties to set up drop boxes for people to drop off their ballots if they choose to do so.

“What we’re proposing is vote by drop box, which is not secure. It’s just a recipe for voter fraud and none of us wants to do that,” said Kankakee Republican Lindsay Parkhurst. Although lawmakers did require locks as part of the plan.

Supporters explained the optional drop boxes would be set up in secure locations. Another optional feature would allow local election officials to implement drive-up voting. Two election judges might come out to vehicle, for example. This plan will also requires the hours to be expanded each day for early voting locations in the weeks leading up to the elections. It also will make election day a school holiday in order to use more schools as polling places once again.

“My own polling place is in a nursing home and those clearly are not appropriate places for polling places on election day. And schools do have the room and are used to doing it, but of course we don’t want to have the public interaction with the students,” said House sponsor Kelley Burke of Evergreen Park.

Along with increasing the use of schools, the measure will also make it easier for 16 and 17-year olds to serve as election judges this year in hopes that less of an at-risk population will be working in polling places.

“We lost a number of experienced election judges that have a great deal of hesitation about performing election duties,” Senate sponsor Julie Morrison, a Democrat from Deerfield, said. “It’s an excellent way for us to engage the younger generation in our government.”

“We want to have the voting ability of all individuals legally done and to protect the integrity of that voting process. That’s what is at heart here. Not only the safety, but also the integrity. And I believe this opens up an area that jeopardizes that integrity of the ballot.”

Republicans, like state Sen. Steve McClure of Springfield, re-iterated that they support everyone voting after Governor Pritzker had said the GOP was against increasing voter turnout.

​“Every single vote is important, and every person must legally and legitimately cast their ballot. While I’m for vote-by-mail, I don’t support vote-by-fraud, and unfortunately this is essentially the Voter Fraud Legalization Act,” he said.

Cost is another issue. The measure will require the mailings be sent out to people who voted in 2018, 2019 and earlier this year, encouraging them to vote by mail. Some of those costs will be covered by the federal government, but there is a chance local governments could end up paying some of the freight.

There is also the question of political costs. Those vote by mail letters go out to voters from the last three years,  but leaves out voters who may have only gone the polls in 2016, the year when Donald Trump was elected president and ran strong in several  areas in downstate Illinois.

After the measure passed the state Senate, sponsor Julie Morrison gave a final explanation about why the measure was so crucial to approve now: local election authorities had to be given guidance about what to do on Election Day in a socially-distant world.

“There is going to be an increase in vote-by-mail regardless of whether we passed this bill or not. Clerks and the election authority need a uniform way to plan and prepare for this increase.”

Sam Dunklau and Bill Wheelhouse are reporters with NPR Illinois in Springfield. 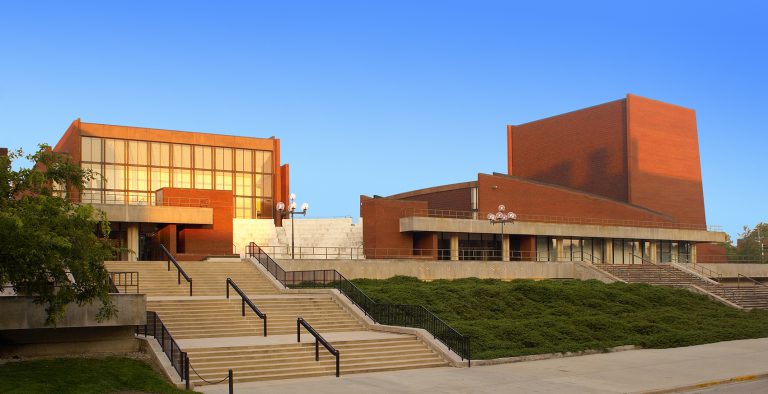 The University of Illinois’ Krannert Center for the Performing Arts has announced the cancellation of all public, in-person performances this fall. Illinois Newsroom’s Brian Moline

By County: Lives Lost To COVID-19