URBANA – About a thousand students at the University of Illinois at Urbana-Champaign have tested positive for COVID-19 since twice-a-week coronavirus testing became mandatory for all students on Aug. 16. In an effort to get the spread of the virus under control, Chancellor Robert Jones ordered students Wednesday to significantly limit in-person activities for the next two weeks.

Jones says a minority of students who threw parties and ignored directives to quarantine or isolate caused super-spreader events — leading to the spike in cases.

“The irresponsible, and I might add, dangerous actions of a small number of our students has created the very real possibility of ending an in-person semester for all of us here at Illinois,” Jones says.

From now through Sept. 16, student movement is restricted to attending classes, going to get tested for COVID-19, shopping for groceries, going to work, attending religious services, medical appointments and engaging in solo outdoor activities.

U of I researchers had previously predicted about 700 cases for the entire semester, even after making  “conservative worst-case assumptions” about student behavior as it pertains to party-going and large gatherings without masks.

Asked why the predictions were so far off, U of I physicist Nigel Goldenfeld says they did not take into consideration that some students would make “willful violations of public health directives.”

Without intervention, campus officials say the U of I could experience 75 to 100 new cases each day, with as many as 8,000 by Thanksgiving.

“Because of what we’re announcing today, I remain very, very hopeful and optimistic that we will be able to continue to move forward with this hybrid version of education,” says Jones.

U of I epidemiologist Becky Smith acknowledged during an emergency meeting of the campus’ faculty Senate Wednesday evening that the case count appears high compared to other colleges and universities. But she says the campus is catching the outbreak much earlier than any other university she has seen.

“Remember that we’re testing everybody,” Smith says. “Our peer institutions are only testing symptomatic people and then doing follow up. So their 100 cases is 100 symptomatic cases. The majority of our cases are asymptomatic. So the number of cases we have is the iceberg. They have the tip.”

Awais Vaid, an epidemiologist with the Champaign-Urbana Public Health District, says the majority of the cases are occurring within private residences, dormitories and fraternity and sorority houses where people are socializing indoors.

He says about 80% of all active cases in Champaign County are affiliated with the U of I and there is no evidence that students are infecting people outside the campus community.

Smith says neither she nor campus officials have spoken to students who have violated the rules, but they have heard from their friends. She says those students have relayed that two beliefs are driving their peers to violate COVID-19 safety measures. 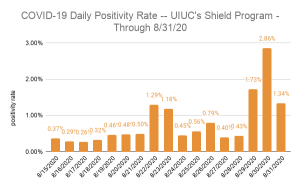 U of I officials say they’re stepping up enforcement of COVID-19 rules on campus. Two students and one fraternity have already been suspended while 100 more students and organizations are being investigated.

The campus is also launching an initiative, known as Shield Team 30, to more quickly identify and contact undergraduate students who have tested positive, instruct them to isolate and answer questions they may have.

Provost Andreas Cangellaris says he expects the temporary ban on all non-essential in-person activities — and increased efforts to identify and suspend misbehaving students — will help turn the tide.

Cangellaris also said during the faculty Senate’s emergency meeting that the campus plans to engage and educate students about why they should follow the rules and cooperate with the local public health department, and help them understand that young people can suffer significant consequences from COVID-19.

“These are some of the things that, you know, unfortunately, are not stuck in people’s minds, especially the younger people,” he says.

If the trend does not improve in the upcoming weeks, Cangellaris says, “we are going to be forced to send everyone home.”

Asked how he would respond to community members who worry that campus reopening is an experiment forced upon them with potentially dire consequences, Chancellor Robert Jones says the campus has deep, respectful relationships with the community “and this is the furthest thing away from an experiment that one could imagine.”

As for whether the campus takes any responsibility for the high case count, Jones did not directly answer the question, instead reiterating the efforts that the U of I has made to attempt to mitigate the spread of the virus.

“Our overall positivity rate is maybe slightly higher than we had anticipated overall, but things are not as bad as some of our peers,” Jones says.

Some U of I employees took to social media to express their concern over campus officials’ decision to threaten expulsion to those who don’t comply with campus policies.

“A bit concerned this very heavy handed reaction… is now going to cause students to be more non-compliant with contact tracers and be fearful of testing,” said Brendan Harley, chemical and biomolecular engineering professor, in a tweet.

A bit concerned this very heavy handed reaction (threatening expulsion for students who disobey campus expectations) is now going to cause students to be more non-compliant with contact tracers and be fearful of testing… https://t.co/DRoip3NiSQ

In a series of tweets, U of I anthropology professor Kate Clancy said campus officials have not listened enough to social scientists and humanists, who would have warned against reopening campus.

“Let me be clear: this is not me gloating,” Clancy said. “This is me devastated and terrified. This is me thinking about a community that may now be facing untold, lifelong health effects. About families who will lose their elders too early. About extending the suffering of people I care about.”

Let me be clear: this is not me gloating. This is me devastated and terrified. This is me thinking about a community that may now be facing untold, lifelong health effects. About families who will lose their elders too early. About extending the suffering of people I care about.

Public health experts have cautioned that campuses turning to punitive measures to force compliance could find such an approach drives behavior underground, making it more risky.

Cangellaris says campus officials did receive input from social scientists who warned them not everyone would obey policies — and they took some of that into account in their modeling.

Campus modelers Nigel Goldenfeld and Sergei Maslov say they are waiting to see “how exactly students will respond to increased pressure from the administration” before they share revised predictions about how the rest of the semester will play out — and what total COVID-19 case counts will be if campus remains open.

In one southern Illinois town, residents grapple with abortion’s past and future

While addressing CPAC, one of the largest conservative conferences in the nation, Illinois Congresswoman Mary Miller (R-Oakland) defended her 2021 bill, “Safety and Opportunity for

Kids are going back to school. Experts say monkeypox isn’t a major concern

https://cpa.ds.npr.org/s4780019/audio/2022/08/monkeypox-and-kids-2way-web.mp3   Monkeypox has been found in nearly every state across the U.S. The White House declared it a public health emergency just a few