URBANA — University of Illinois researchers have proposed investing in a micronuclear reactor to help fight carbon emissions—and reach a goal of making the Urbana-Champaign campus carbon neutral by 2050.

The proposed micronuclear reactor would contribute about 13% of campus energy and help reduce the university’s carbon footprint.

The proposal is being submitted to the U.S. Department of Energy (DOE) under the Advanced Reactor Demonstration program, which aims to spur the development of nuclear systems through cost-shared partnerships. If approved, the DOE would give the university $44.8 million to fund the research and testing project.

“Nuclear power is the densest source of energy on the planet,” says Creen Ahmad, a student at the U of I and Chair of the Environmental Sustainability Committee. “Nuclear requires only a fraction of land and mass for energy in comparison to other forms. As sustainability is something I and younger generations prioritize, nuclear energy, especially micro systems like this, are extremely promising.”

In a webinar held for community members last week, U of I researchers including Katy Huff and Caleb Brooks of the Department of Nuclear, Plasma, and Radiological Engineering (NPRE) noted they’re still in the early stages, but that it holds a lot of potential for clean energy moving forward.

“[We] believe that a university research, training and test reactor representing the next generation of nuclear technology will be an essential part of the University of Illinois’ broader leadership in a clean, sustainable energy future for the world,” Katy Huff, Assistant Professor with NPRE, said in the webinar.

In response to questions about safety, the presenters noted that micronuclear reactors are highly reliable, resilient to extreme weather events, and inherently safe and secure. 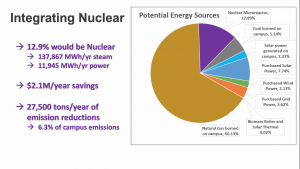 The Illinois Climate Action Plan (iCAP) aims for the Urbana-Champaign campus to become carbon neutral by 2050. As part of iCAP, the university’s current clean energy portfolio includes a wind agreement, geothermal energy and two solar farms, though natural gas still makes up the majority of energy sources on campus.

But with a micronuclear reactor powering both steam and electricity, the campus’ natural gas energy source would be reduced from 75% to 66%.

“The fact that the reactor can provide both steam and electricity is really a fortuitous situation in terms of needs of the campus, and it’s going to help very much with reducing the carbon footprint,” says George Gross, a professor of electrical and computer engineering at the U of I.

Caleb Brooks, Associate Professor at NPRE, says that if approved, the research project would help pave the way for micronuclear reactors to become more commonplace—and to be solutions for reducing carbon emissions across other campuses.

“Perhaps in the future when these devices can become off-the-shelf purchase technologies, then we can see de-carbonization of campuses across the country and across the world with these kinds of technologies,” Brooks says.

If the proposal is accepted, it would involve a six year research project beginning in 2021, with the reactor expected to be operational by 2025.