CHICAGO — Democrats appear in little danger of losing control of statewide offices three weeks from now, with the party’s candidates for Illinois secretary of state, attorney general, comptroller and treasurer all holding sizable leads over their Republican rivals in a new WBEZ/Chicago Sun-Times Poll.

In two of those races, Democrats hold double-digit advantages over Republicans, raising prospects that Gov. JB Pritzker may offer some modest political coattails if his own projected double-digit lead against Republican Darren Bailey holds.

These so-called “down-ballot” races feature a stable of mostly lesser-known political figures — whether incumbents looking to hold onto their offices or candidates aiming to score their first big political breaks or make a comeback. The contests also serve as a kind of political weather vane that can be effective in measuring the direction of Illinois’ partisan winds.

In the race to become the state’s chief legal officer, first-term Democratic Attorney General Kwame Raoul is ahead of Republican Thomas G. DeVore by a 44% to 35% spread. Libertarian Daniel K. Robin drew support from 8% of those polled.

DeVore, an ally of and onetime lawyer for Bailey, was a repeated legal pain for Pritzker, suing to block the governor’s COVID-19 school mask mandates, to undermine his executive authority early in the pandemic and to allege later that Pritzker had defamed him. Those efforts were mostly unsuccessful.

In both of those races on the Nov. 8 ballot, 17% of respondents said they were unsure of which candidate to support.

Giannoulias’s and Raoul’s leads come as both Democrats maintain a visible television and digital advertising presence, though not as robust as their counterparts in the governor and state Supreme Court races, while Republicans aren’t choosing — or able — to gobble up expensive airtime on Chicago network television.

And in the race for state treasurer, two-term Democratic incumbent Michael W. Frerichs has a 43% to 35% lead over state Rep. Tom Demmer, R-Dixon, who also is a member of Durkin’s House GOP leadership team and a five-term House member. Libertarian Preston Nelson has 6%, with another 16% undecided. 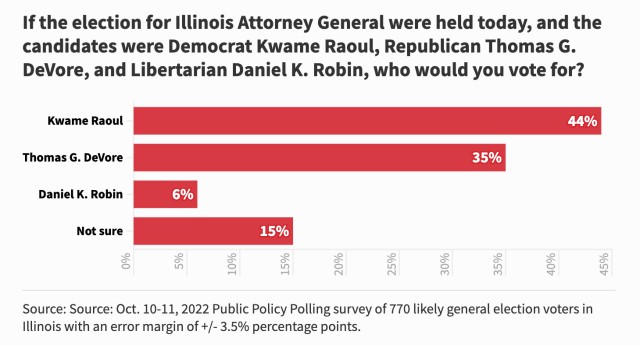 “A lot of these down-ballot races functionally become generic ballot questions,” said Jim Williams, an analyst with the polling firm, referring to a way in which pollsters measure what percentages of voters align with Republicans or Democrats.

“What we know about the state of Illinois is all things being equal, it’s probably going to be around a 10-point spread there” in favor of Democrats, he said. “Sure enough, that’s what we’re seeing for all these Democrats in these down-ballot races.” 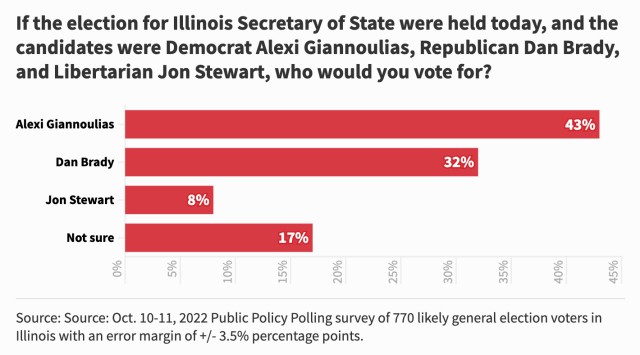 Rachel Roth, a 52-year-old Democrat and resident of far northwest suburban Gilberts, acknowledged being only “relatively acquainted” with those seeking the down-ballot offices but believes Pritzker is positively affecting her party’s fortunes in those races.

“Absolutely, I do think it’s a coattail effect with Gov. Pritzker,” said Roth, who indicated in the poll she intended to vote for each of the Democratic candidates in the down-ballot races.

“I think the assumption is made that if you are running on the Democratic ticket in Illinois, at this point, you are pro-choice, you are a supporter of Gov. Pritzker … and whatever race you’re running in would put you in line with the work that he’s doing statewide,” she said.

President Biden will host a joint press conference with Emmanuel Macron on Thursday as a part of the French president’s three-day state visit. The joint

Democrats say they hope to pass the massive legislation, which comes in response to the Highland Park shooting, in the lame duck session in January.