The findings ahead of the Nov. 8 election — and less than a week after a televised gubernatorial debate — aren’t completely rosy for Pritzker, however, also showing the Democratic incumbent still struggling to boost his favorability numbers. But Bailey’s approval ratings are even worse. 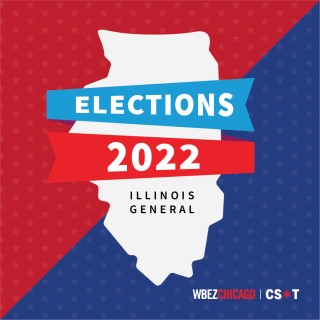 In the governor’s race, the poll found Pritzker leading Bailey 49% to 34%, with Libertarian Scott Schluter boasting 8% — with 9% of those polled still undecided. When it comes to offering their opinions of the candidates, 46% held favorable views of Pritzker, 46% unfavorable and 9% were unsure.

Unsurprisingly, Pritzker’s highest favorability numbers come from his overwhelmingly Democratic hometown of Chicago, where 70% hold a good opinion of him. In suburban Cook County, that number slipped to 42% and to 41% in the collar counties.

But most strikingly, 37% of downstate voters polled viewed the Democratic governor from Chicago favorably. That’s five percentage points higher than Bailey’s favorability numbers downstate, which the poll found was at 32%. Bailey’s highest marks came from suburban Cook County and the collar counties, where 34% of those polled said the downstate farmer and state senator was favorable.

Conducted Monday and Tuesday, the survey of 770 likely voters has an overall error margin of plus or minus 3.5 percentage points, but that margin widens when the results are broken down into small categories, including by region. 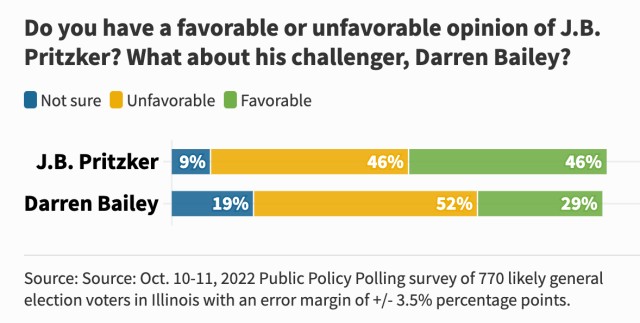 But the overall direction of the numbers arguably reflects the state of the campaign.

“He [Pritzker] made that move to kind of define Bailey before Bailey could define himself to the general electorate,” said Jim Williams, an analyst for Public Policy Polling, which conducted the WBEZ/Sun-Times poll. “It really painted Bailey the way that Pritzker wanted him to be painted, and that seems to have stuck.”

Williams called Bailey’s low favorability “striking” — with not a lot of time to gain traction, especially with voters more evenly split on the governor.

“To be over 50% unfavorable at this stage in the game is not great, and with Pritzker at parity, it makes it really hard for Bailey to be on the comeback,” Williams said.

The poll finds a definite partisan split, with 90% of Democrats saying they’d vote for Duckworth and 79% of Republicans supporting Salvi. Duckworth took the lead in independents polled, with 44% compared to 31% for Salvi.

Pritzker, the billionaire heir to the Hyatt fortune, has an astounding $81,693,663.92 in his campaign war chest — and a personal fortune estimated at $3.6 billion to dip into whenever he needs more.

Those deep pockets have allowed him to remain on viewers’ TV screens virtually without interruption for more than 14 months.

Leading up to the June primary, Pritzker started running campaign ads in July of 2021. His reelection campaign switched to general election ads a day after the June 28 primary.

Bailey aired ads in the Chicago area during the primary, but his first general election commercial didn’t appear on local TV screens until this past week — roughly four weeks before voters cast their final ballots.

The Bailey spot blames Pritzker for rising crime in Chicago and across the state overall. The GOP-aligned PAC People Who Play The Rules has been running millions of dollars worth of anti-Pritzker ads since April — but not all of them mention Bailey by name.

While the WBEZ/Sun-Times poll found voters are indeed worried about crime, it was not uppermost on their minds.

Jobs and the economy were the top concerns for 29% of those polled, followed by crime and public safety at 22%, election integrity at 12%, abortion at 11% and climate change and the environment at 9%. 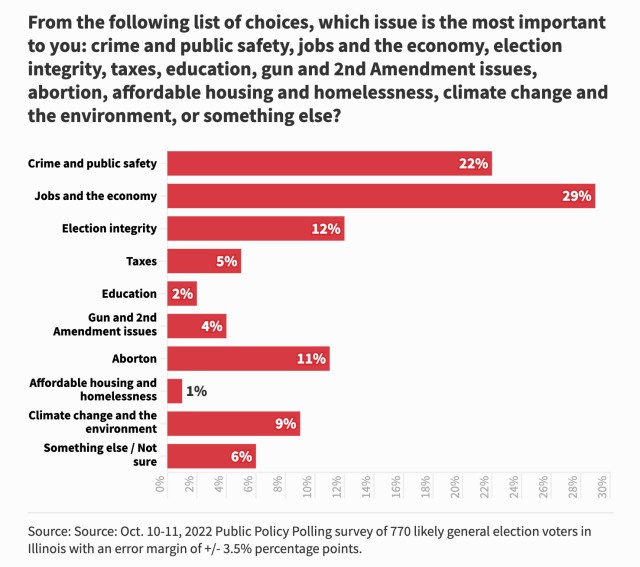 But no matter what voters are most concerned about, Pritzker’s TV commercials seem to be working.

Ruth Alexander, a 66-year-old retiree from Dolton, chose crime as her top issue of concern, but she was planning to vote for Pritzker, whom she dubbed “the lesser of two evils.”

“The other one [Bailey] is an extremist, if you can believe all you see in the television commercials,” said Alexander, who was surveyed in the poll. “Pritzker has been solid. I haven’t agreed with everything he’s done. But if what I’ve seen in the commercials is anywhere near the truth, Bailey is just too much of an extremist.”

Alexander said she’ll vote for Pritzker, despite Republican commercials focusing on crime as a reason to “Fire Pritzker.”

“I’m a senior citizen. It’s almost like you’re almost a prisoner in your own home,” Alexander said.

“I’m a woman of color. Every time you think about getting out, you got to think twice because you don’t know whether or not you’re going to make it home safely.”

To some voters, Pritzker’s handling of the pandemic, including his push for vaccines, earned him high marks.

“He was not afraid to tell people that they really needed to pay attention to what was happening. Vaccines were hugely important if you could get them,” said Rachel Roth, 52, of far northwest suburban Gilberts. “He made decisions that while we may not have loved them at the time to shut lots of stuff down in the state, I think it saved lives. I really do. And because of that, I really respect how he governed.”

Roth, a longtime Democrat and current chief operating officer of Schaumburg-based American Conference of Cantors, a Jewish nonprofit organization, also said she was deeply offended by Bailey’s remarks comparing the lives lost to abortion to those lost in the Holocaust.

“That was so disturbing to me that he didn’t have what felt like a basic understanding of the genocide of Nazi Germany,” Roth said. “To be able to, in his mind, equate abortion to the murder of millions of people was really disturbing to me. And I fear that having someone in the statehouse with that belief system is really going to be detrimental to women’s rights, to female rights.”

Oak Lawn resident Melissa Lyons said she plans to vote for Bailey, whom she said would bring “family values” to the table and “sound fiscal management.” Lyons finds Pritzker’s concentration on social issues, including abortion, off-putting, especially since the state already has some of the strongest abortion rights laws on the books.

“If we have an official like JB Pritzker pushing all about abortion and how extreme Darren Bailey is, it’s unsettling, because at the end of the day, who makes that decision on who’s too extreme and who’s not too extreme,” Lyons, 51, said. “I feel like some things need to be looked at a little more in depth, for instance, the runaway spending with the government. Do we really have balanced budgets?”

The poll of 770 likely general election voters, conducted by Public Policy Polling, was taken on October 10 and 11 and has a margin of error of plus or minus 3.5%. Of those polled, 38% said they were Democrats, 32% said they were Republicans and 30% were independents. The geographic breakdown was 35% downstate, 26% collar counties, 20% Chicago and 19% in suburban Cook County.