CHICAGO — As states around the country adopt stricter restrictions on abortion with the overturning of Roe v. Wade, more than half of Illinois voters say abortion should remain legal here, according to a new WBEZ/Chicago Sun-Times Poll.

About 52% of likely voters polled said abortion should be legal in most or all cases, with 36% saying it should be illegal, and 12% unsure.

With three weeks to go before the Nov. 8 general election, abortion has been a hot-button issue in races up and down the ballot, from governor to legislators to the Illinois Supreme Court.

Illinois’ rights to abortion are already protected in a state law dubbed the Reproductive Health Act, which in 2019 established a “fundamental” right to abortion, requires health insurers to cover them and safeguards abortion providers from criminal or civil sanctions. Abortions are banned at the point a fetus can survive outside the womb, which is typically at least 24 weeks.

The WBEZ/Sun-Times Poll was conducted by Public Policy Polling from Oct. 10-11 and surveyed 770 likely voters. The margin of error is plus or minus 3.5 percentage points, but that margin widens when the results are broken down into smaller categories, including by region.

According to the poll, those who supported keeping abortion legal overwhelmingly voted for Democrat Joe Biden for president in 2020, tended to be women and skewed younger.

Respondents who live in the collar counties or downstate were more likely than Chicagoans to say abortion should be mostly or completely illegal. Opponents of legalized abortion in the poll also have less education than those who support abortion.

Still, most of those surveyed supported some abortion rights in this state, with only 10% saying it should be illegal in all cases. 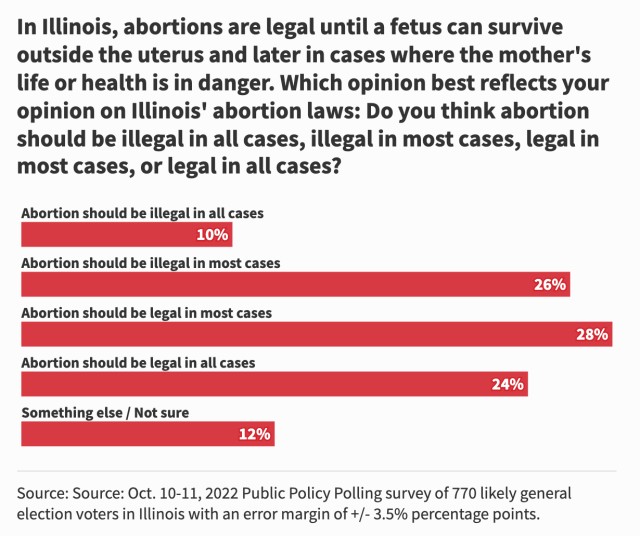 Angela Lee, 57, of south suburban Matteson chose abortion as the most important issue to her, above crime and the economy and a half dozen other issues.

Lee questioned the lack of resources for women who are forced to keep their pregnancies and said she suffered a miscarriage that required a procedure also used during abortions.

“That still sits with me,” said Lee. “It’s something that is very personal.”

Stanley Klimek, 78, of west suburban Glen Ellyn, responded in the poll that abortion should be mostly illegal, but told WBEZ his views on abortion don’t impact how he votes.

“There’s got to be some point where a woman has had enough time to make a decision,” Klimek said. “The other side of the coin is maybe the father wants the baby.”

Organizations for and against abortion say there’s a lot at stake in November’s election, even in a blue state such as Illinois.

Terry Cosgrove, president and CEO of Personal PAC, an influential abortion rights fundraising arm, said in 50 years of canvassing, he’s hearing more interest in this election than ever before.

He’s mainly focused on the Illinois Supreme Court races, where Republicans hope to gain control for the first time in more than 50 years. That could threaten abortion rights, Cosgrove said.

“I don’t think people understand there are lawsuits right now sitting in the courts to undo our progress over the last 30 years,” Cosgrove said.

Money has poured into Personal PAC’s coffers this summer after the U.S. Supreme Court ruled that states could ban abortions. The organization has raised more than $1 million since July 1, state campaign finance records show.

Illinois Right to Life Action, an anti-abortion group, is pushing messaging to voters about how extreme the organization believes the state’s abortion laws are, said spokeswoman Amy Gehrke.

Ralph Rivera is chairman of the Illinois Citizens for Life PAC and a longtime Springfield lobbyist. He said he thinks groups like his that are opposed to abortion have somewhat hit a ceiling when it comes to adding more people to voter rolls.

“My experience is that the vast majority of our people are registered to vote,” Rivera said. “It’s [about] motivating them to get out to vote.”

The anti-abortion group hasn’t had the same boost in funding after Roe v. Wade was overturned that Personal PAC did — Illinois Citizens for Life PAC received $100 in July, nothing in August, and raised nearly $4,000 in September, state campaign finance records show.

Neither Cosgrove nor Rivera had data to show whether their efforts were succeeding in getting people to register to vote.

Still, Elaine Kamarck, a senior fellow at the Brookings Institution, sees signs the abortion rights fight is leading people to the polls. She points to the referendum in deeply Republican Kansas, where voters rejected a proposed amendment that said there was no right to abortion. And she looks to a congressional race in a swing district in New York where the winning Democratic candidate campaigned on abortion rights.

“Issues of reproduction are front and center in women’s lives from the time they menstruate well into menopause,” Kamarck said. “It’s a different sort of issue than we’ve ever had in American politics because it is so deeply personal.”

Illinois Newsroom gets stories from public radio stations from across the state, including WBEZ-Chicago, WCBU-Peoria, WGLT-Normal, WVIK-Rock Island, WIUM-Macomb, WNIJ-DeKalb, WSIU-Carbondale, WUIS-Springfield, and St. Louis Public Radio.
PrevPreviousParents at Champaign Unit 4 open houses: don’t move students next year
NextExtreme takeover? Pritzker and Bailey accuse one another of being an extremist who is dangerous to IllinoisNext

Final vote on funding to come in lame duck session in January SPRINGFIELD — On the final day of their fall veto session, Illinois lawmakers