Last year, 233 criminal incidents occurred on the University of Illinois at Urbana-Champaign campus according to the 2019 annual security and fire report, mandated by the federal crime reporting law for colleges known as the Clery Act.

For example, there were 764 incidents reported in just five months on the daily log from January to May of 2020 because it includes incidents reported by Champaign and Urbana police and from some locations outside the area. Those reports were included because they meet Clery Act reporting requirements, which call for the collection and reporting of crime statistics across and beyond campuses.

“We listen to our community’s desires and needs, we use data-driven strategies to identify problem areas, and we do our best to prevent crime through educating our campus community,” he wrote in an email.

Wade also said Clery Act reports are more of a “…result of our efforts to respond to crime and collect crime data rather than a driver of our policies.”

Some law enforcement officials said the Clery Act guidelines can be confusing and unclear for crime reporting and can lead to ‘unintended harms’, especially in the wake of COVID-19, which may make campuses appear less safe than they are.

One leading critic, Edward Davis, the former police commissioner of Boston, Mass. – home to over 20 colleges with more close by – said it is time to reform the Clery Act.

“People come into communities and institutions that are attempting to do the right thing and are largely committed to the intent of the law,” he said. “But what used to be a 20 page report had requirements added onto it to become 100 or more pages and usually requires a full-time compliance employee.”

In 1986, information about crime on college campuses was not always available or provided by institutions. After student Jeanne Clery was raped and murdered in her dorm room at Lehigh University in Pennsylvania, the Clery Act was passed four years later in response to studies showing that there had been decades of underreporting of crime on college campuses.

As new requirements were added on to the law over time, such as the Violence Against Women Act (VAWA), the resources required of campuses to comply increased to the point that critics say the intent of the law was lost under federal regulations.

The University of Illinois’s annual report published in September 2020 is 233 pages long for the Urbana-Champaign campus, an increase of 87 pages from the previous year’s report. Each campus part of a university must publish their own reports.

In fact, most universities have many employees involved in the compliance process in response to increased demands. Campus security authorities, police, Title IX staff and other decision makers must submit information they receive that is reportable under the Clery Act.

But according to a survey of these employees across the U.S., many are calling for increased guidance from the Department of Education, including universal standards and improvements to the 256-page handbook.

Clery Act violations can be in the millions

Eleven percent said they did not receive training, which can be costly due to privatization of training. The non-profit training organization Clery Center, started by Jeanne Clery’s parents, Clery Center, offers a training video for CSAs for $450. 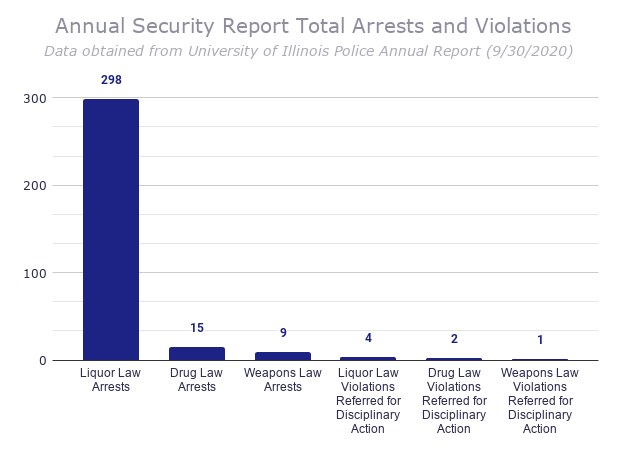 But when a college fails to comply with reporting these messages, a federal audit by the U.S. Department of Education can result in hefty fines — up to $58,000 per violation — but they can be even steeper.

In 2019, Department of Education fined Michigan State University $4.5 million after the Larry Nassar scandal for “systemic failure to protect students from sexual abuse.” Nassar was convicted for sexual assault and child pornography charges after decades of abusing girls while serving as the USA Gymnastics national team doctor and professor at MSU.

School audits can also take years to complete investigations, such as Arnold’s Beauty School in Tennessee. The school’s audit during 2017 was not completed until January 2019 when it found numerous violations.

The University of Illinois has no record of being fined, and was recognized nationally for the “Clery Compliance Program of the Year” award in 2018.

The act has five central requirements for colleges to meet in order to participate in the federal student financial aid program:

Campus security authorities also report on crimes they hear or are told about no matter how much information is given, such as “a sexual assault has occurred,” and little to no extra information.

The failure to review all reports with care, which are all legally defined as crime reports, can lead to audits that result in fines. Those reports and information on fines are uploaded to the Department of Education’s website.

The high costs of noncompliance are ‘unfair to institutions’ according to Edward Davis, the former Boston police commissioner, who now runs his own private security firm after his retirement from the police department. He said when compliance becomes more about checking boxes, then the law loses its intent.

“When a federal employee finds a discrepancy in what they perceive to be the right thing — that’s a major decision,” he said. “Transparency can always be improved. Someone with a law enforcement background doing audits would be helpful… Being able to reason through an incident and an issue is really critical to this.”

The Role of Daily Crime Logs

Daily crime logs, analyzed earlier this year by CU-CitizenAccess, often include surrounding cities’ crimes even if the crime is not affiliated with someone attending the college.

“In a nutshell, when you are looking at the daily crime log, understand that the majority of what’s in there was not actually reported to UIPD,” said Patrick Wade, communications director for the University of Illinois police department. “…Most people are left more confused than when they started.”

Even the design of the daily crime log under the law can be misleading, such as what critics call a lack of ‘meaningful follow-up’. Critics, like Davis, want more context put around the log, and additional safety information to be provided to communities.

Wade said many activities go into policing behind the scenes, including meaningful follow-up.

“Just because you see [a crime is] ‘administratively closed’ does not in any way mean that there was not meaningful follow up,” Wade said. “There is a lot going on behind the scenes that the daily crime log is not designed to reflect.”

In fact, on October 1, 2020, University Police Chief Alice Cary sent out follow-up safety notices after motor vehicle thefts were reported to the campus community via a timely warning the previous week, one component of the Clery Act. These follow-ups included more information about the investigation, the suspects, the level of activity in the area and general safety tips. The daily crime log is not set up to contain this information.

The confusion about the crime log was also identified by Douglas’s study, where respondents identified that reporting has the potential to mislead people to think the campus is less safe. 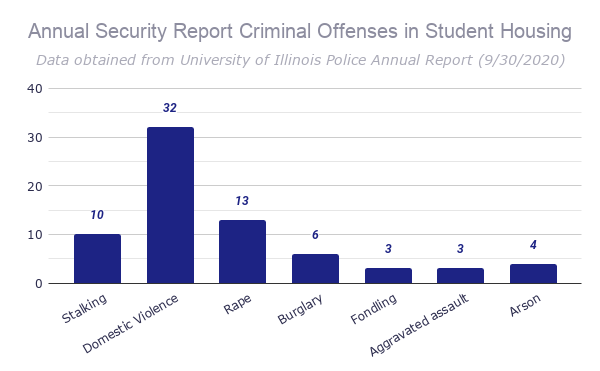 “Urban settings have all kinds of resources for public safety, but there is always some risk or danger,” Douglas said in an interview. “But it’s happening in a relatively safe context, but one neighborhood over there is sometimes more danger. With little information, it shapes how people think about it and sometimes leads people to believe off-campus environments are more safe.”

Douglas, who both researched the Clery Act and served in a reporting role for years, said timely warnings are the best investment for law enforcement.

“Timely warnings have a bigger impact on the community,” Douglas said. “[They] make [their] way right into your daily life and tells you with immediacy that something is happening now and you need to protect yourself or change your behavior.”

Other harms cited by the study’s respondents, who come from a variety of roles in the system, include provoking panic, reinforcement of racial stereotypes and the potential to cause victims to relive trauma.

There are 6,104 higher education institutions and a total of 10,764 campuses in the U.S. that report crime statistics to the Department of Education according to their website on October 7, 2020. Each institution’s safety information can be viewed on the federal Campus Safety and Security website.

The Clery Center commits itself to training initiatives and advancement of campus safety strategies.

In a response to a critical article by Edward Davis, the center wrote that these practices should be an institution’s responsibility rather than a compliance effort.

“If a campus finds that people can’t easily read or access the annual security report, we’d love to connect with them and share strategies other institutions have used to make the information easy to read and understand,” associate executive director Abigail Boyer wrote in Campus Safety Magazine in March of this year.

In response to common criticisms, Boyer acknowledged many campuses in the U.S. struggle to allocate resources and afford training. She said a change in mindset can be one solution for lifting the burden of staff, time and money.

But Davis argued even institutions that are committed to campus safety still face challenges imposed by the Department of Education.

“More context needs to be put around the crime logs,” he said. “The ‘fog of war’ requires police responding to the scene to find out what happened, but if the university has made a good faith effort, then technical violations should be excused on good faith.”

Although training by the Clery Center can cost more than $400 per attendee for seminars, institutions have seen success in reducing the burden of resources by investing in training, Boyer said.

“Our training is designed so that individuals attending can take the information and bring it back to others on campus, and they’re given specific capacity-building exercises for a Clery team or committee to implement,” she said.

Some strategies she cited include peer-sharing, collaboration with campuses with fewer resources to alleviate costs, cross-training for campus systems and state support for training.

According to the website, all in-person training sessions for 2020 have been canceled due to COVID-19 and will resume in 2021.

At its core, the debate over the Clery Act’s effectiveness surrounds improving public safety. Although Davis and study respondents cite many improvements they want to be made, they agree with the Clery Center on the intent:

“We believe universal standards and continual, up-to-date guidance from the Department of Education can further understanding of equitable practices when implementing the Clery Act regulations, which is positive for all,” Boyer wrote.

During his time as police commissioner for Boston, Davis saw many successful programs to improve safety beyond the scope of the law’s requirements. Outside of reducing arrests and alternatives to incarceration, he said programs that directly involve university administration with the community help develop and outline challenges and mitigate issues.

Boyer says better awareness of the Clery Act and its goals will help people understand the benefits of the annual reports outside of statistics, and hopefully the increased awareness will help garner resources for, “the people on campus doing this important work every single day.”

Bobcats made a big comeback in the Midwest. But not everyone is happy they can be hunted again

For 44 years, Illinois banned bobcat hunting. That changed in 2016, when the state started a lottery for permits to hunt the predators. And every